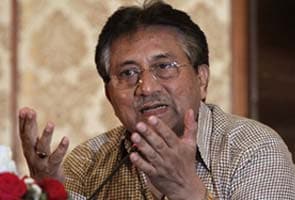 Lahore/Islamabad: Pervez Musharraf's nomination papers for a parliamentary constituency in Pakistan's Punjab province were today rejected, even as the Supreme Court decided to hear a petition seeking the former military ruler's trial for treason.

The Returning Officer for a parliamentary constituency at Kasur in Punjab rejected 69-year-old Musharraf's nomination papers for the May 11 general election on the ground that the signature did not match the one on his national identity card, officials said.

Reports said a lawyer, Javed Kasuri Advocate, too had objected to Musharraf's candidature on the ground that the former President had violated Articles 62 and 63 of the Constitution, which specify that candidates should have a "good character" and be "sagacious, righteous and non-profligate".

In a separate development, a man named Syed Tariq Ali submitted an objection to nomination papers filed by Musharraf for another parliamentary constituency in Islamabad.

It could not immediately be ascertained when election authorities would take up the objection.

In another significant development, a three-judge bench of the Supreme Court led by Chief Justice Iftikhar Chaudhry will take up on Monday a petition filed by former Rawalpindi High Court Bar Association president Taufiq Asif seeking Musharraf's trial for treason.

The petition was included among cases scheduled to be heard next week, officials said.

Asif's petition was clubbed with two other applications seeking similar action against Musharraf, they said.

At the hearing on Monday, the bench will decide whether treason proceedings should be initiated against Musharraf, who recently returned to Pakistan after nearly four years in self-exile.

Promoted
Listen to the latest songs, only on JioSaavn.com
Musharraf has filed papers to contest the general election from four parliamentary seats in Karachi, Islamabad, Chitral and Kasur.

Meanwhile, a lawyer named Zafarullah has filed an application on behalf of the PML-N in the Election Commission seeking Musharraf's disqualification on the grounds that he is an accused in four cases, including the assassination of Benazir Bhutto and the killing of Baloch leader Akbar Bugti in a 2006 military operation.

COVID-19 May Increase Risk Of Stroke In Children: Study