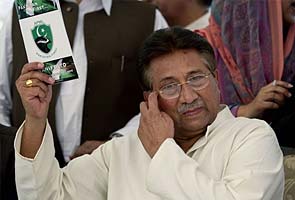 Peshawar: Pakistani judges on Tuesday disqualified Pervez Musharraf from running in the upcoming parliamentary election, a blow to the former military ruler who recently returned from self-imposed exile to make a political comeback, lawyers said.

Over a week ago, a judge in the remote northern district of Chitral gave Musharraf approval to run in the May 11 election, even though he was disqualified in three other districts for suspending the constitution and sacking senior judges while in power.

Lawyers challenged the decision in Chitral, and a three-member appellate tribunal on Tuesday disqualified Musharraf from running in the district, said two of the lawyers who raised objections, Taufiq Asif and Rao Abdur Rahim.

Asif challenged Musharraf's candidacy because of his actions while in power, while Rahim said there were procedural flaws with the former military ruler's nomination.

The tribunal's decision is one of the biggest blows in what has been a bumpy return for Musharraf after over four years in self-imposed exile.

Musharraf seized power in a military coup in 1999 and ruled for nearly a decade before he was forced to step down and left the country in 2008 because of growing discontent with his rule. He returned to Pakistan last month to stage a political comeback, but he has been met with low levels of public support, a variety of legal challenges and Taliban death threats.

The former military strongman was only met with a couple thousand people at the airport in the southern city of Karachi when his plane from Dubai landed on March 24, a sign of how little support analysts say he enjoys in the country. A few days later, an angry lawyer threw a shoe at Musharraf as he walked through a court building in Karachi.

Musharraf faces a variety of legal charges, including some related to the 2007 assassination of former Prime Minister Benazir Bhutto. He has not been arrested because he arranged pre-arrest bail before he arrived, a feature of Pakistan's legal system.

The Supreme Court is also hearing petitions from lawyers alleging Musharraf committed treason while in office, an offense that can be punished by death or life in prison.

Amid all of this, the Pakistani Taliban have threatened to assassinate Musharraf. The militants released a video the day before Musharraf returned to Pakistan saying they had set up a special death squad to target him.

There is also concern that attacks by the Taliban and other militants could hamper the upcoming election.

A bombing Tuesday in the country's southwest hit a convoy of vehicles carrying a candidate in the parliamentary election, killing four people and wounding six others, said Pakistani officials.

Zehri, the Baluchistan president of the Pakistan Muslim League-N party, was unharmed, but his brother, son and nephew were killed, along with a driver, said Megal.

Zehri's vehicle passed over the bridge safely because it had jammers that prevented the bomb from detonating, said another government official, Mohammad Akbar. But several vehicles traveling in the convoy were hit.

No one has claimed responsibility for the attack.

Promoted
Listen to the latest songs, only on JioSaavn.com
Baluchistan is home to both Islamic militants and nationalists who have been waging an insurgency against the government for decades, seeking greater autonomy and a larger share of the province's natural resources.