"People Laughed At A President": At UN, Trump Suffers The Fate He Feared

As the midterm elections approach, Trump has begun boasting of a long list of accomplishments for his administration, at one point reciting them at a recent campaign rally from two pieces of paper that he pulled from his suit jacket. 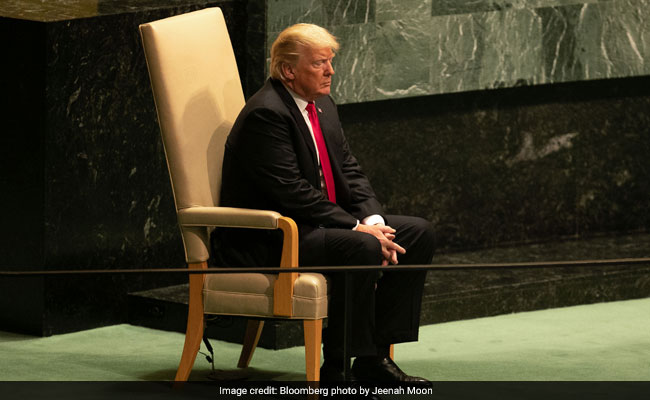 President Trump waits to speak during the U.N. General Assembly meeting in New York on Tuesday.

President Donald Trump has long argued that the United States has been taken advantage of by other nations - a "laughing stock to the entire World" he said on Twitter in 2014 - and his political rise was countenanced on the premise that he had the strength and resolve to change that.

But at the U.N. General Assembly on Tuesday, Trump got a comeuppance on the world's biggest stage. Delivering a speech that aimed to establish U.S. "sovereignty" over the whims and needs of other nations, the president's triumphant moment was marred in the first minute when he was met by laughter - at his expense.

The embarrassing exchange came when Trump boasted that his administration had accomplished more over two years than "almost any administration" in American history, eliciting audible guffaws in the cavernous chamber hall.

The president appeared startled. "Didn't expect that reaction," he said, "but that's OK."

Members of the audience chuckled again - perhaps this time in sympathy.

Trump continued his address, which lasted an additional 34 minutes, but the moment marked a pointed rejoinder from the international community to a president who has delighted in poking traditional U.S. allies and partners in the eye on trade, security alliances and general diplomatic bonhomie.

"He has always been obsessed people are laughing at the president. From the mid-'80s, he's said: 'The world is laughing at us. They think we're fools,' " said Thomas Wright, a Europe analyst at the Brookings Institution. "It's never been true, but he's said it about every president. It's the first time I'm aware of that people actually laughed at a president. I think it is going to drive him absolutely crazy. It will play to every insecurity he has."

For Trump, the moment wasn't just embarrassing. It also punctured one of the core fabulist assertions of a president who has, according to Washington Post fact-checkers, made more than 5,000 false or misleading statements since taking office.

As the midterm elections approach, Trump has begun boasting of a long list of accomplishments for his administration, at one point reciting them at a recent campaign rally from two pieces of paper that he pulled from his suit jacket.

In doing so, the president typically has claimed sweeping success and placed himself favorably in historical comparison to the nation's greatest leaders. At a rally in Springfield, Missouri, last week, Trump was wrapping up an hour-long address to supporters with some flowery teleprompter prose about the courage of America's founders when he strayed from the script to assert that his election in 2016 was "the greatest movement in the history of our country."

At the United Nations, Trump's claim to have done more in less than two years than most of his 44 predecessors defied any bounds of reality - or hubris. The difference was that he was not talking to a room full of excited, red hat-wearing "MAGA" supporters who cheer him on.

"On one hand, you feel, 'Oh, god, how awful that the American president is being laughed at on the world stage,' " said Julie Smith, who served as deputy national security adviser to former Vice President Joseph Biden.

"But on the other hand, you kind of feel good that Trump was finally escaping the bubble of political rallies that continually gives him the impression that everyone agrees with the false claims he is making," said Smith, who watched the speech in Berlin, where she is spending a year as a fellow at the Bosch Academy. "There was a moment I thought to myself: 'This is good that the president is being exposed to how the rest of the world sees him.'"

Though the laughter of the world leaders at the U.N. was spontaneous, there might have been a bit of extra feeling behind it among some of the delegates in the room. Television cameras caught German diplomats chuckling - perhaps a form of release after relations between Trump and Chancellor Angela Merkel got off to a bad start and have continued to devolve.

Last year, Germans attending a conference at the Economic Council of the Christian Democratic Union in Berlin laughed and applauded after U.S. Commerce Secretary Wilbur Ross' microphone was cut off in mid-sentence after he spoke past his allotted time via video feed. Merkel then rebutted parts of his remarks in her own speech.

On social media, Trump's critics quickly mocked him on Tuesday.

"The world just laughed @realDonaldTrump," comedian Wanda Sykes wrote in a tweet. Referring to the variety show in Harlem in which the audience boos and heckles bad performers offstage, she added: "Stay tuned, they might go full 'Showtime at the Apollo' him."

By the afternoon, Trump was projecting an air of nonchalance, telling reporters that his boast in the speech "was meant to get some laughter." But most weren't buying it from a president who seldom laughs at himself and whose default expression is an unsparing glare.

"It's got to hurt," Wright said. "It was on camera and it was spontaneous. It was on one of the biggest stages in the world."