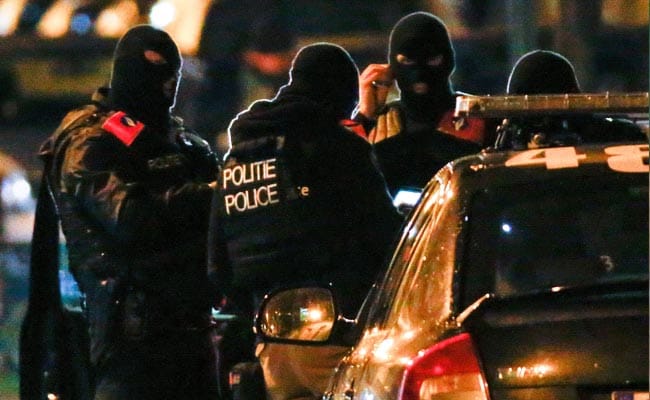 Belgian special police forces take part in an operation in the neighborhood of Molenbeek in Brussels, Belgium, November 22, 2015, after security was tightened in Belgium following the fatal attacks in Paris. (Reuters)

Brussels: Belgian police arrested 16 more people in late-night raids searching for those behind the deadly November 13 attacks in Paris, but failed to find a prime suspect as the government locked down the capital for a third day on Monday.

Brussels will again see its metro and many shops closed, as well as schools, while offices in a city that is also home to the European Union and NATO are likely to have few staff after the prime minister warned of imminent Paris-style attacks.

Salah Abdeslam, the 26-year-old suspect from Brussels who has been on the run since he left Paris hours after his elder brother blew himself up at a cafe there, continues to elude a Europe-wide manhunt. A third brother, who was not involved, said Abdeslam may have thought better of going through with the killing. Belgian police fear he returned home to launch new attacks.

"What we fear is an attack similar to the one in Paris, with several individuals who could possibly launch several attacks at the same time in multiple locations," Prime Minister Charles Michel told a news conference early on Sunday evening.

Shortly afterwards, armed police backed by armoured vehicles and helicopters stationed overhead began a series of raids in which 19 premises in Brussels and three in the industrial city of Charleroi, 50 km (35 miles) to the south, were searched.

Prosecutor Eric van der Sypt told a news conference early on Monday that no weapons or explosives were found and that a judge would review the detentions of the 16 arrested. In one incident, police fired on a car that was later found in Brussels, but it was not clear, van der Sypt said, if it was linked to the case.

"Abdeslam Salah was not found during the raids," he added.

Several Belgian media carried unsourced reports saying Abdeslam had been spotted in a car near Liege heading towards the German border. There have been numerous reported sightings in recent days, but Abdeslam, a petty criminal who ran a bar in Brussels' Molenbeek immigrant quarter, has eluded police.

Three people have so far been charged in Belgium, where French authorities say the Paris attacks were organised among Brussels' substantial network of Islamic State followers, some of whom have fought in Syria. Two admit they drove Abdeslam back to Brussels from Paris but deny taking part in any violence.

Fear of what Abdeslam or other suspected jihadists might be planning caused Belgium to call off an international soccer match last Tuesday. Late on Friday, it raised to the maximum Level Four the security alert in the capital. Michel renewed that advice on Sunday, shutting much of Brussels for a third day on Monday.

Interior Minister Jan Jambon said Abdeslam was not the only security threat: "It is a threat that goes beyond just that one person," he told broadcaster VRT. "We're looking at more.

That's why we've put in place such a concentration of resources."

Bernard Clerfayt, the mayor of the Brussels district of Schaerbeek, was quoted by broadcaster RTBF as saying there were "two terrorists" in the capital area ready to carry out violence.

Finance ministers of the euro zone countries will go ahead with a meeting at the European Council in eastern Brussels, EU officials said, but other EU meetings have been cancelled.

Michel said a new evaluation of the situation would be made on Monday afternoon and everything was being done to return the city to normal as quickly as possible.

Commuters trying to get to work will suffer delays as a result of the metro closure, although some companies had already indicated on Sunday they were ready for staff to work from home, easing childcare problems caused by schools being shut.

Belgium has been at the heart of investigations into the Paris attacks in which 130 people were killed. Two of the suicide bombers, Brahim Abdeslam and Bilal Hadfi, lived in Brussels.

Mohamed Abdeslam, the brother of Brahim and Salah, urged Salah in an interview on RTBF television to give himself up, adding he believed he was still alive because he had had a last-minute change of heart while in Paris. The lawyer of one of the men who picked him up said her client had noticed he was "extremely nervous" as they drove back to Brussels, being pulled over and let go three times by French police.

In France, investigators on Sunday extended into a fifth day the detention of a man arrested on Wednesday outside the building where the suspected ringleader died in a raid. Police also released a picture of a man they said had blown himself up in the attacks and called for witnesses.

The Belgian government has advised the public to be alert but not to panic. People have been told to avoid crowds in the capital, while authorities have also closed museums, cinemas and shopping centres. Clubs and venues have cancelled events.

Brussels' chief rabbi said the city's synagogues were shut over the weekend for the first time since World War Two. Soldiers are on guard at Jewish sites and public buildings.

The city was quiet and largely untroubled until after dark on Sunday. Shops are usually shut on Sundays. But business owners and hotelkeepers are starting to worry that the tourist trade, which usually picks up with a glittering Christmas market in Brussels' picturesque old town, could start to be damaged.

Forced indoors, some of Brussels' multilingual 1.2 million residents took to social media to share and joke about their frustration. Twitter hashtag #BrusselsLockdown spawned many photos of kittens, some in combat gear, a wry reference to the security level: Four, or in French, Quatre - pronounced Cat'.
© Thomson Reuters 2015