The visit is considered historical because it will be the first for an Indian Prime Minister to visit Palestine. 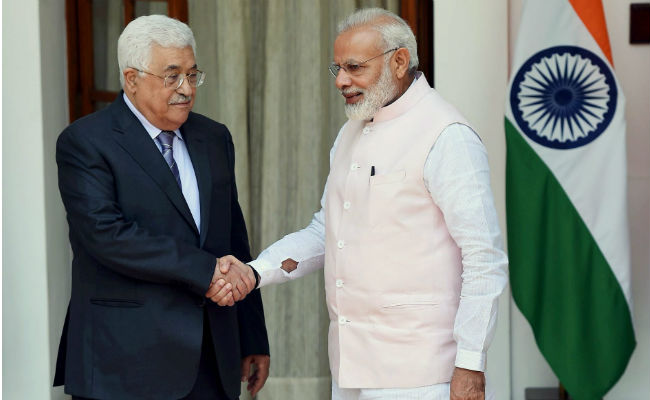 Ramallah: The Palestinian Presidency on Wednesday welcomed the "historical and significant" visit of "grand guest" Indian Prime Minster Narendra Modi ahead of his visit to Palestine on February 10, the first ever prime ministerial visit from India here.

"The Palestinian Presidency welcomes the historic and important visit of Prime Minister Narendra Modi to the city of Ramallah on Saturday, the first of an Indian prime minister to Palestine," Palestinian news agency WAFA reported.

"The visit is considered historical, because it will be the first for an Indian Prime Minister to visit Palestine," the report said.

Palestine President Mahmoud Abbas will welcome PM Modi at the presidential headquarters in Ramallah, where the two will discuss issues of mutual interest and the latest political developments in the region.

"The Presidency announced that President Abbas and his guest, Prime Minister of India, will hold a session of important talks, which will address the latest developments in the political process in the region because of the weight of India's international weight."

The statement said bilateral issues between the two countries and regional issues of relevance will be on the agenda.

"The Presidency said the visit will be a unique chance to express appreciation for India's ongoing support and positions that support peace and Palestinians' right to freedom and independence," the report said.

India has been continuously supporting the Palestinian cause at various international fora. New Delhi voted in the UN General Assembly in December last year against US President Donald Trump's unilateral recognition of Jerusalem as the capital of Israel.

"The meeting will also discuss the regional and international situations of common concern, stressing that the visit will also be an opportunity to thank India for its continued support and support for peace and the right of our people to freedom and independence," the WAFA report said.

The visit will witness the signing of a number of bilateral agreements between the two countries "aimed at strengthening the bonds of friendship between the Palestinian and Indian peoples and enhancing cooperation in a number of important fields".

"President Mahmoud Abbas will hold a luncheon in honour of the grand guest of Palestine and his delegation, followed by a press conference for the two leaders," the report stated.

PM Modi will visit Ramallah on Saturday on the first leg of his three-nation tour that will also take him to the United Arab Emirates and Oman.

This will be the fourth meeting between PM Modi and President Abbas after their meetings on the sidelines of the UN General Assembly in 2015 and in the Paris climate summit later that year and the Palestinian President's visit to India last year.

Since the historic visit of then President Pranab Mukherjee to Palestine in 2015, work on projects worth $30 million in Palestine has commenced.

Promoted
Listen to the latest songs, only on JioSaavn.com
This apart, the visit is also aimed at deepening the huge bilateral agenda, including cooperation in the areas of health, IT, tourism, youth affairs, sports and agriculture.

The visit will also de-hyphenate Israel and Palestine in terms of India's foreign policy perspective after PM Modi's standalone visit to Israel in July last year.