The ruling Pakistan Muslim League-Nawaz (PML-N) allege the judiciary is interfering in the executive's work. 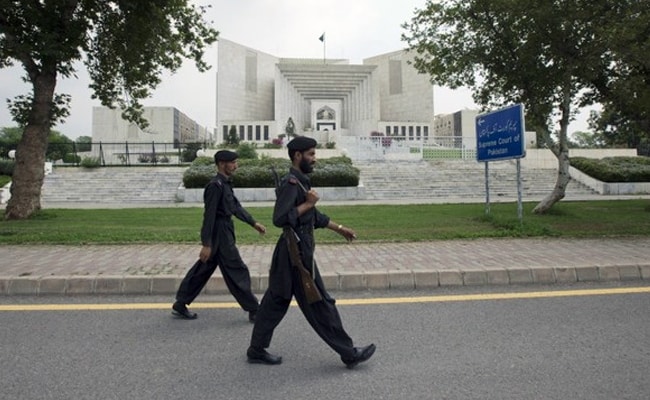 Islamabad: Visibly annoyed, Pakistan's Chief Justice Saqib Nisar picks up a dirty steel bowl, displays it to a barrage of TV cameras, slams it against a rack, and shouts: "You serve food in it?"

The outburst was captured during a recent visit to inspect patients and their living conditions at a hospital psychiatric ward in the northwestern city of Peshawar - one of a series of trips around the country in what Mr Nisar has termed a crusade against corruption and bad governance.

With TV channels following his every move and lapping up his verbal barbs, Mr Nisar has become a thorn in the side of the ruling Pakistan Muslim League-Nawaz (PML-N) and its founder Nawaz Sharif, whose third stint as prime minister was cut short in July when the Supreme Court disqualified him over a small undeclared source of income.

Mr Sharif and his family now face corruption charges that could see the veteran leader jailed, and there is a growing concern within PML-N ranks that the judiciary could dent the party's electoral prospects in a general election on July 25.

"The present scenario, the way the judiciary is interfering in the executive's work ... the governments can't work like this," said outgoing Prime Minister Shahid Khaqan Abbasi, speaking at a news conference on Monday after the election was called at the weekend.

Mr Nisar has used Pakistan's so-called "suo moto" provision - which allows him to take up cases on his own initiative - to launch inquiries ranging from the payment of sugar cane farmers by mills and increases in milk prices to allegations of corruption in the running of the country's railways and national airline.

He says such cases, and his frequent public appearances to inspect development projects and public facilities such as schools and hospitals - rare for a sitting chief justice - are aimed at protecting the poor.

"We have to fight for those people who unfortunately don't have means to get their rights," Mr Nisar said, addressing lawyers early this year.

Mr Nisar is not the first activist chief justice. Indeed, his high media profile has drawn parallels with Iftikhar Chaudhry, who initially won plaudits for helping oust military dictator Pervez Musharraf in 2008, but was later criticised for overstepping his constitutional remit.

PML-N insiders and some analysts say Mr Nisar's assertiveness smacks of judicial overreach and hints at a return to Pakistan's past, when they say the judiciary cut politicians down to size at the behest of the powerful military, which has ruled Pakistan for nearly half its history since independence in 1947.

PML-N insiders accuse shadowy military networks of working with the judiciary to weaken the party in the run-up to the election. Some analysts say the judges would be unable to take such an aggressive stance against the civilian government without at least tacit support from the generals.

"With their specific targeting of PML-N, this would undermine fair play in election, and squeeze Nawaz Sharif," Ayesha Siddiqa, an author and political analyst, told Reuters.

"The judicial decisions are a strong signal as to where the powerful establishment will lay their eggs this time."

The military did not reply to requests for a comment. The army has previously said it does not interfere in politics.

Mr Nisar's office did not respond to requests for comment.

Mr Nisar has previously denied being a military stooge and has shown no signs of pulling punches ahead of the general election, serving contempt of court notices to senior PML-N figures who have criticised the judiciary.

While he has also taken on the opposition, his principal target has been the PML-N and Mr Sharif himself.

During several visits in recent months to the province of Punjab, Mr Sharif's longtime electoral heartland, Mr Nisar has been demanding the provincial government - run by Mr Sharif's brother Shehbaz - improve public sector institutions. In April, he inspected a new train project that the PML-N wants to showcase before the polls, which he threatened to shut down in January if the government didn't prioritise education and health.

"Punjab government did nothing in the last 10 years," Mr Nisar said from the bench in March.

He also removed PML-N Information Minister Maryam Aurangzeb, who has been critical of the judiciary, from a parliamentary committee that regulates the media. "The committee can't be independent as long as she is a member," he said.

"We're happy that Supreme Court is upholding the supremacy of law in this country," Tehreek-e-Insaf (PTI) party leader Imran Khan told reporters after the court barred Mr Sharif from holding party office for life in April.

But many within the legal profession are unnerved.

"A considerable number of lawyers, including myself, don't see this activism as a positive step," said Ali Ahmad Kurd, former president of the Supreme Court Bar Association.

Mr Sharif, whose second stint as prime minister was ended by a military coup in 1999, has labelled his dismissal and the corruption charges against him as a "fraud" and a witch hunt.

Last month, he said he had "grave doubts" about whether the upcoming election would be "fair and free".

The top court followed up Mr Sharif's July disqualification by removing him as PML-N party leader in February, and lately banned him for life from holding any public office. Last month the Islamabad High Court also disqualified from parliament Foreign Minister Khawaja Asif, one of Mr Sharif's closest allies.

In recent weeks, Pakistani TV channels have been muting the sound on Sharif when he talks about the judiciary and military, prompting him to complain of creeping censorship.

But Mr Nisar has not been immune to criticism. The top judge's growing profile has raised eyebrows, and drew ridicule after a news clip of his presidential-style motorcade, showing at least 34 vehicles, went viral.

Promoted
Listen to the latest songs, only on JioSaavn.com
Journalist Omar R. Quraishi shared on Twitter another video clip of Mr Nisar flanked by several police and paramilitary commandos.