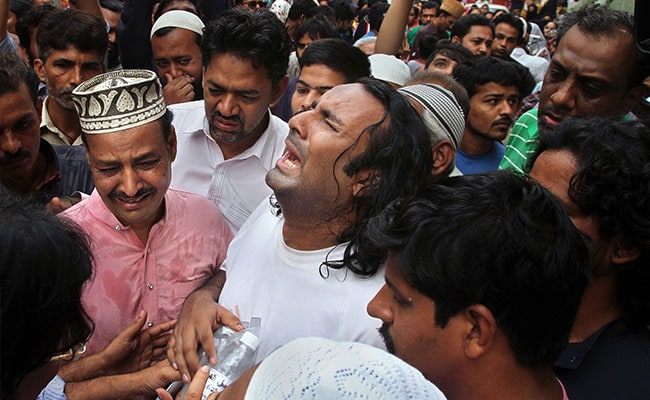 People comfort the brother, center, of famous Sufi singer Karachi : Amjad Sabri, who was killed by unknown attackers, outside his residence in Karachi, Pakistan. (PTI Photo)

KARACHI: Thousands of mourners crowded the funeral procession of a beloved Pakistani singer on Thursday, a day after he was gunned down in the Karachi in an attack claimed by a faction of the Pakistani Taliban.

Amjad Sabri, 45, was one of most popular singers of the "qawwali", Sufi devotional music that dates back more than 700 years.

Devotees thronged the ambulance carrying Sabri's body to the funeral, blocking its progress.

Sabri's death was the latest in a high-profile series of attacks in Karachi, a megacity of 20 million plagued by political, ethnic and sectarian violence.

Karachi's murder rate has fallen sharply since 2013 after a crackdown by paramilitary Rangers, but new fears were stoked on Monday after the kidnapping of the son of Sindh High Court Chief Justice Sajjad Ali Shah.

Two days later, gunmen on a motorcycle shot at the windscreen of Sabri's moving car in the congested Liaquatabad area of the southern city, and a relative travelling with him was wounded.

A spokesman for a branch of the Pakistani Taliban, Qari Saifullah Saif, claimed the killing late on Wednesday, saying it was in retaliation for a song that the hard-line group considers blasphemous.

In 2014, Sabri was caught up in a blasphemy case involving a Sufi song he had sung on a morning television show that mentioned religious figures in a way some deemed offensive.

Violence is common in Karachi despite a sharp decline in murders since the Pakistani military launched a crackdown two years ago against suspected militants and violent criminals.

In May, gunmen shot dead prominent Pakistani rights activist Khurram Zaki, known for his outspoken stance against the Taliban and other radical Islamist groups, in the central part of the city.