Following the girl's statements in the court, the Sikh community has demanded that the police bring her back to her parents' house irrespective of the conversion being forced or consensual. 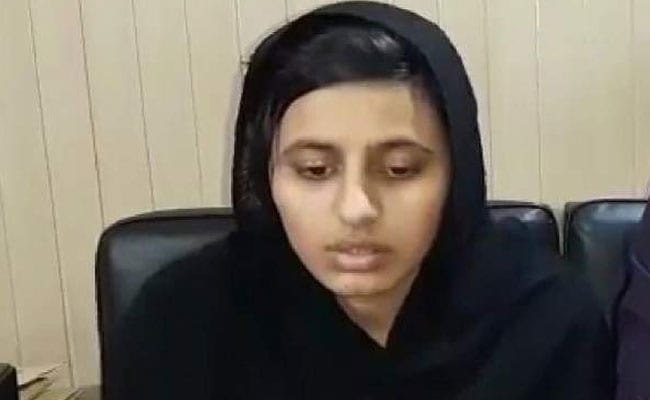 Jagjit Kaur's family alleged that she was converted to Islam at gunpoint.

Under pressure, the government in Pakistan's Punjab province has constituted a high-level committee to negotiate with Sikhs angry over the kidnapping and forced conversion of a teenage girl from the community.

Jagjit Kaur's family alleged that she was converted to Islam at gunpoint and forced to marry a Muslim boy. Her family says she is 18-year-old.

A first information report or an FIR has been filed against six people in the case, Muhammad Jamil, Nankana City Police Investigation Officer, told PTI.

Police have arrested one of the suspects named Arsalan, a friend of the prime accused, Mohammad Hassan, who married the Sikh girl.

The girl has been sent to a shelter home in Lahore on Friday on the court's order.

The incident sparked tensions between the Sikh and Muslim communities.

Some reports said that the Sikh community in Nankana Sahib, some 80 km from Lahore, has announced a ban on the entry of Muslims in gurdwaras including Gurdwara Janamasthan, the birth place of Guru Nanak Dev, until the girl is reunited with her family and action is taken against the culprits.

The Punjab government has formed a high-level committee led by Punjab Law Minister Raja Basharat which has been sent to Nanakana Sahib to calm the situation.

The committee will negotiate with a 30-member committee formed by Pakistan's Sikh community over the incident.

Pakistan's Gurdwara Parbhandik Committee Secretary General Ameer Sigh told PTI that the situation in Nankana Sahib has been under control. "Hopefully this matter will be resolved amicably," Mr Singh said and clarified that the Sikh community had not banned Muslims entry to gurdwaras in Nankana Sahib.

"This is against the teaching of our religion. Sikhs welcome any person of other religion to its worship place," he said.

According to a memorandum sent to Inspector General of Police (IGP) Punjab by the District Police Officer (DPO) of Nankana Sahib, an FIR was filed in the Nankana police station on August 28 against six people who were accused of abducting and forcefully converting the Sikh girl.

The DPO, in his memorandum, attached the "relevant documentary and video proof of the marriage and the girl's conversion to Islam".

Copies of the documents from the National Database and Registration Authority, which show that Kaur is 19 years of age, and the nikahnama were also attached.

The DPO informed the IGP that the Sikh community was "agitating against the incident.

The police were contacted by Sheikh Sultan, Kaur's advocate, who told them she had embraced Islam and her name was changed to Ayesha,. The girl then contracted a marriage with Mohammad Hassan --the prime accused in the case -- on her own will.

Sultan further said that he had filed a writ petition in the Lahore High Court on Kaur's behalf against her family and local police, accusing them of "illegal harassment".

The girl also submitted a written statement in the court, stating that she had converted to Islam and married Hassan of her own will. She also accused her family of "wanting to kill her".

Following the girl's statements in the court, the Sikh community has demanded that the police bring her back to her parents' house irrespective of the conversion being forced or consensual.

India on Friday said it has raised with Pakistan the issue of a Sikh girl being kidnapped and forced to convert to Islam in that country.

Ministry of External Affairs Spokesperson Raveesh Kumar in New Delhi said the ministry has received a number of representations from various quarters of civil society in India, including Sikh religious bodies, at the "reports of the incident of abduction and forced conversion of a minor Sikh girl in Pakistan".

"We have shared these concerns with the government of Pakistan and asked for immediate remedial action," he said.