Over 1,000 people gathered in Lahore, blocking roads and demanding the release of the Tehreek-Labbaik Pakistan leader, Saad Rizvi. 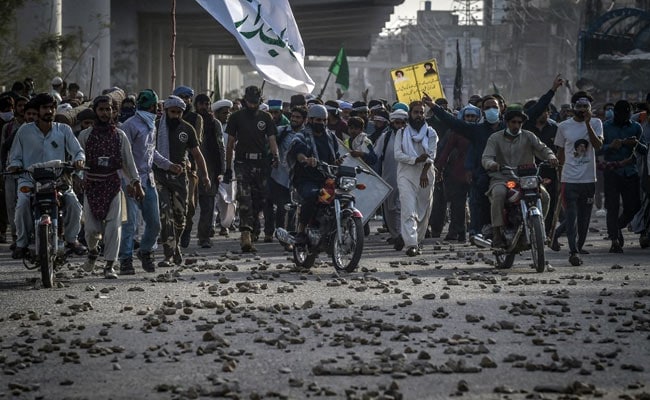 Tehreek-Labbaik Pakistan has said it will not end protests until their leader is released.

At least two Pakistani policemen were killed on Friday in clashes with supporters of a banned radical Islamist party, which has previously called for the expulsion of the French ambassador.

More than 1,000 people gathered in the eastern city of Lahore, blocking roads and demanding the release of the Tehreek-Labbaik Pakistan leader, Saad Rizvi.

Rizvi was arrested in April, when Pakistan's government outlawed the party in response to violent anti-France protests.

"Two police constables were killed today in the line of duty during clashes," Rana Arif, a spokesman for Lahore police, told AFP.

Mazhar Hussain, a second police official, said protesters had hurled petrol bombs at officers when they moved in to clear the protest.

"The mob also used sticks and pelted police with stones," he said.

The TLP has said it will not end protests or enter into talks with the government until their leader is released.

Supporters have threatened to move in convoys towards the capital Islamabad, where police have closed off roads with shipping containers.

The TLP has waged an anti-France campaign since President Emmanuel Macron defended the right of a satirical magazine to republish cartoons depicting the Prophet Mohammed -- an act deemed blasphemous by many Muslims.

Six police officers were killed in April, when the TLP staged days of rallies which paralysed roads.

It led to the French embassy recommending all of its citizens leave the country.

The group has previously received widespread support from mainstream religious groups, complicating government efforts to crack down on the party.

Few issues are as galvanising in Pakistan as blasphemy, and even the slightest suggestion of an insult to Islam can supercharge protests, incite lynchings, and unite the country's warring political parties.

"Don't Blame Others:" Taliban To Pak On Mosque Blast