Over 90 Killed By Typhoon Damrey, Vietnam's Deadliest Typhoon In Years

Typhoon Damrey is the latest and deadliest of the 12 major weather systems that have barreled into the country so far this year. 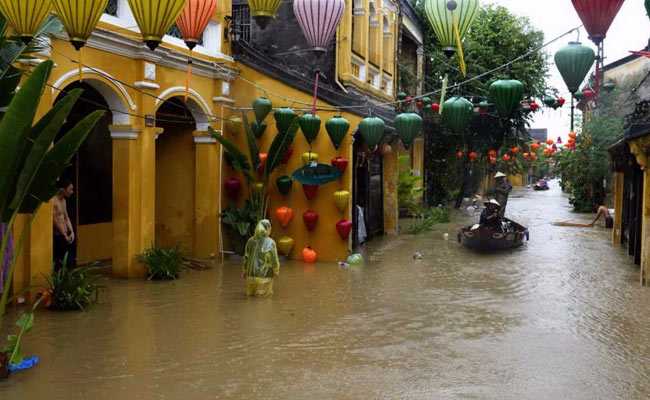 Local residents navigate on a boat as others wade through the flooded historic town of Hoi An. (AFP)

Danang,Vietnam: More than 90 people have perished in floods and landslides unleashed in Vietnam by Typhoon Damrey, one of the deadliest storms to hit the country in years.

The typhoon made landfall on Saturday, blowing off roofs and submerging huge swathes of Vietnam's south-central coast, including outside the city of Danang where leaders are gathering for the Asia-Pacific Economic Cooperation (APEC) summit.

Floods, landslides and boat accidents have killed 91 people so far, the government said Thursday. As authorities began releasing water from swollen dams, search efforts are ongoing for 23 others reported missing.

More than 120,000 houses and 250,000 hectares of farmland were damaged in the storm, according to the country's disaster management authority.

While Danang was spared major destruction, the nearby historic city of Hoi An was flooded.

"Our family spent some days on the second storey of the house, eating only raw instant noodles as the power was cut off," local vendor Nguyen Thi Dung told AFP.

With the floodwater receding, local authorities and residents were busy clearing out debris and tidying up the city on Thursday for a scheduled visit from the spouses of APEC leaders.

Hoi An is a UNESCO world heritage site, known for its unique architecture.

Typhoon Damrey is the latest and deadliest of the 12 major weather systems that have barreled into the country so far this year.

Promoted
Listen to the latest songs, only on JioSaavn.com
Natural disasters have killed more than 13,000 people and caused more than $6.4 billion in damage over the past 20 years in Vietnam, according to the World Bank.

Over 700 Protesters Arrested In Iran, Including 60 Women