Oslo suspect wrote of fear of Islam and plan for war 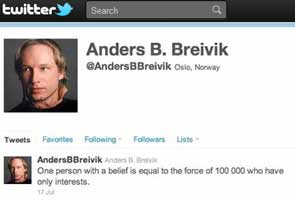 Oslo: The Norwegian man charged Saturday with a pair of attacks in Oslo that killed at least 92 people left behind a detailed manifesto outlining his preparations and calling for a Christian war to defend Europe against the threat of Muslim domination, according to Norwegian and American officials familiar with the investigation.

As stunned Norwegians grappled with the deadliest attack in the country since World War II, a portrait began to emerge of the suspect, Anders Behring Breivik, 32. The police identified him as a right-wing fundamentalist Christian, while acquaintances described him as a gun-loving Norwegian obsessed with what he saw as the threats of multiculturalism and Muslim immigration.

"We are not sure whether he was alone or had help," a police official, Roger Andresen, said at a televised news conference. "What we know is that he is right wing and a Christian fundamentalist."

In the 1,500-page manifesto, posted on the Web hours before the attacks, Mr. Breivik recorded a day-by-day diary of months of planning for the attacks, and claimed to be part of a small group that intended to "seize political and military control of Western European countries and implement a cultural conservative political agenda."

He predicted a conflagration that would kill or injure more than a million people, adding, "The time for dialogue is over. We gave peace a chance. The time for armed resistance has come."

The manifesto was signed Andrew Berwick, an Anglicized version of his name. A former American government official briefed on the case said investigators believed the manifesto was Mr. Breivik's work.

The manifesto, entitled "2083: A European Declaration of Independence," equates liberalism and multiculturalism with "cultural Marxism," which the document says is destroying European Christian civilization.

The document also describes a secret meeting in London in April 2002 to reconstitute the Knights Templar, a Crusader military order. It says the meeting was attended by nine representatives of eight European countries, evidently including Mr. Breivik, with an additional three members unable to attend, including a "European-American."

The document does not name the attendees or say whether they were aware of Mr. Breivik's planned attacks, though investigators presumably will now try to determine if the people exist and what their connection is to Mr. Breivik.

Thomas Hegghammer, a terrorism specialist at the Norwegian Defense Research Establishment, said the manifesto bears an eerie resemblance to those of Osama bin Laden and other Al Qaeda leaders, though from a Christian rather than a Muslim point of view. Like Mr. Breivik's manuscript, the major Qaeda declarations have detailed accounts of the Crusades, a pronounced sense of historical grievance and calls for apocalyptic warfare to defeat the religious and cultural enemy.

"It seems to be an attempt to mirror Al Qaeda, exactly in reverse," Mr. Hegghammer said.

Mr. Breivik was also believed to have posted a video on Friday summarizing his arguments. In its closing moments, the video depicts Mr. Breivik in military uniform, holding assault weapons. Rarely has a mass murder suspect left so detailed an account of his activities. The manifesto describes in detail his purchase of chemicals, his sometimes ham-handed experiments making explosives and his first successful test detonation of a bomb in a remote location on June 13.

He intersperses the account of bomb-making with details of his television-watching, including the Eurovision music contest and the American police drama "The Shield."

The manifesto ends with a chilling signoff: "I believe this will be my last entry. It is now Fri July 22nd, 12.51."

Indeed, the operation appeared to have been extremely well planned.

According to the police, Mr. Breivik first drew security services to central Oslo when he exploded a car bomb outside a 17-story government office building, killing at least seven people.

Then he took a public ferry to Utoya Island, where he carried out a remarkably meticulous attack on Norway's current and future political elite. Dressed as a police officer, he announced that he had come to check on the security of the young people who were attending a political summer camp there, many of them the children of members of the governing Labor Party.

He gathered the campers together and for some 90 hellish minutes he coolly and methodically shot them, hunting down those who fled. At least 85 people, some as young as 16, were killed.

The police said Saturday evening that they expected the death toll to climb. There were still bodies in the bombed government buildings in Oslo, and at least four people missing on Utoya.

The police also said that unexploded munitions were still in some downtown Oslo buildings, and they had not ruled out the possibility that Mr. Breivik had accomplices.

The police also said he had registered a farm in Rena, in eastern Norway, which allowed him to order a large quantity of ammonium nitrate fertilizer, an ingredient that can be used to make explosives. The authorities were investigating whether the chemical had been used in the bombing.

Besides the manifesto, Mr. Breivik left other hints of his motives.

His lone Twitter post, while not calling for violence, paraphrased Mill - "One person with a belief is equal to the force of 100,000 who have only interests" - suggesting what he saw as his ability to act.

Those postings, along with what was previously known about Mr. Breivik publicly, aligned with but hardly predicted the bloody rampage he would undertake on Friday.

Before then, he had been a member of the right-wing Progress Party, which began as an antitax protest and has been stridently anti-immigrant and anti-Muslim.

Joran Kallmyr, a member of the party who is now Oslo's vice mayor for transportation, said he met Mr. Breivik several times in 2002 and 2003 at local party meetings. "He was very quiet, almost a little bit shy," Mr. Kallmyr said. "But he was a normal person with good behavior. He never shared any extreme thoughts or speech with us. There was absolutely no reason to expect that he could do something like this. We're very shocked."

Mr. Breivik quit the party in 2006, apparently disappointed by the party's move toward the center.

"He didn't like our politics, I guess, and moved on," Mr. Kallmyr said.

His Internet posts also indicated contempt for the Conservative Party, which he accused of having given up the battle against multiculturalism.

But on Friday he directed his firepower at the center-left Labor Party, which leads the coalition government.

"Breivik feels that multiculturalism is destroying the society and that the enforcing authority is the prime minister and the Labor Party, the lead party of contemporary Norwegian politics," said Anders Romarheim, a fellow at the Norwegian Institute for Defense Studies.

But the attacks, along with what appear to have been years of preparation for them, raised questions about whether the Norwegian security authorities, concentrating on threats of Islamic terrorism, had overlooked the threat from the anti-Islamic right.

"This is the Norwegian equivalent to Timothy McVeigh," the right-wing American who bombed a federal building in Oklahoma City in 1995, said Marcus Buck, a political scientist at the University of Tromso in northern Norway. "This is right-wing domestic terrorism, and the big question is to what extent Norwegian agencies have diverted their attention from what they knew decades ago was the biggest threat" to focus instead on Islamic militants.

The unclassified versions of the last three Norwegian Police Security Service reports assessing national threats all played down any threat by right-wing and nationalist extremists. Instead, the reports emphasized the dangers posed by radical Islam, groups opposed to Norway's military involvement in Afghanistan and Libya, and others.

The 2011 report, released early this year, concluded that "the far-right and far-left extremist communities will not represent a serious threat to Norwegian society."

Even after the attacks, that appeared to be the official position.

"Compared to other countries I wouldn't say we have a big problem with right-wing extremists in Norway," Prime Minister Jens Stoltenberg told reporters at a news conference on Saturday.
"But we have had some groups, we have followed them before, and our police is aware that there are some right-wing groups."

Even if the authorities had focused on right-wing groups, it was unlikely that they would have noticed Mr. Breivik.

Kari Helene Partapuoli, director of the Norwegian Center Against Racism, said Mr. Breivik did not belong to any violent neo-Nazi groups that she was aware of, and his Internet postings, before those of last week, did not espouse violence.

"The distance between the words spoken and the acts that he carried out is gigantic, because what he did is in a different league of what the debates have to do about," she said.

Arild Groven, secretary general of the Norwegian Shooting Association, a sports group, confirmed that Mr. Breivik had belonged to Oslo Pistolklubb, one of the 520 clubs in the association.

"We all read and watch the news about the shootings in the United States," Mr. Groven said. "But it doesn't happen here."

Promoted
Listen to the latest songs, only on JioSaavn.com
Kristian Ulrichsen, a researcher at the London School of Economics, said in some ways the homegrown nature of the attack made it harder for Norwegians to accept. "With 9/11 in America, people could ask, 'Who are they?' and could pour their rage out on someone else," he said. "But we can't disavow this person, he's one of us."