Orphaned Brothers Escaped A Massacre. Now They Have To Survive A Refugee Camp

More than 650,000 Rohingya Muslims from Myanmar fleeing a military crackdown have entered Bangladesh since late August, one of the most rapid exoduses in history. This month, the United Nations human rights chief suggested that the Myanmar military deliberately targeted civilians belonging to the minority Rohingya in "acts of appalling barbarity" that may have included "elements of genocide." 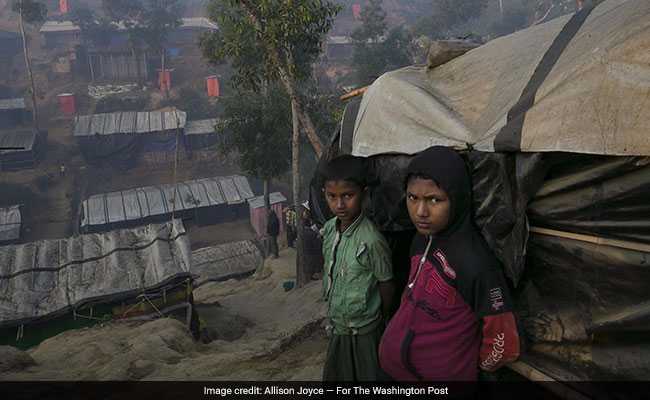 Shamsul, left, and Jafar stand outside their refugee camp in Cox's Bazar.

UKHIA, Bangladesh: Three months ago, these two Rohingya brothers had a loving family, a little house near a river, a worn soccer ball to play with and 15 cows for fresh milk.

It's all gone now: The family killed. The house torched. The cows stolen.

More than 650,000 Rohingya Muslims from Myanmar fleeing a military crackdown have entered Bangladesh since late August, one of the most rapid exoduses in history. This month, the United Nations human rights chief suggested that the Myanmar military deliberately targeted civilians belonging to the minority Rohingya in "acts of appalling barbarity" that may have included "elements of genocide."

The ordeal began Aug. 25, when Rohingya militants attacked Myanmar police posts. Five days later, the boys' village was inundated with soldiers who - human rights groups allege - killed, raped and burned villagers in their homes. Shamsul, 8, and Jafar, 11, followed a stream of people to Bangladesh, two of about 1,800 children who made the terrifying days-long journey to safety without their immediate caregivers, according to UNICEF. Many have been taken in by neighbors or extended families, authorities say, but face dangers such as child traffickers, diseases and malnourishment.

By early December, the brothers had learned the physical landscape of the sprawling camp - which fishmonger sells the best dried fish, which adults should be avoided, which empty stretch of dirt is best for kicking a ball.

But their grief is harder to navigate.

"Everyone has parents but us," Shamsul often says out loud, part in pain, part in wonder.

On that August morning, soldiers came to their village toting automatic rifles and shoulder-fired rocket-launchers and sprayed the air with gunfire, according to witness accounts.

The villagers scattered, some fleeing into the jungle for safety. Jafar said he took refuge on a small hill overlooking his house and watched as soldiers beat his mother, Monira, and three of his siblings, Somuda, 15, Khurshid, 7, and Shalida, 3 months. They pushed them into the house, barricaded the door and set the structure on fire. His family was burned alive inside, Jafar said.

Villagers who escaped Tula Toli, a small community of rice farmers also known as Min Gyi, said local boys and men, including the boys' father, were summarily executed on a riverbank. An October report from Amnesty International said the violence at Tula Toli "appears to be one of the worst atrocities of the Army's ethnic cleansing campaign."

Myanmar's military leaders and its civilian government, led by Aung San Suu Kyi, have consistently denied that security forces in the Buddhist-majority country have targeted the Rohingya.

In Tula Toli, escape for Jafar meant crossing a fast-moving river. He had been separated from Shamsul when the soldiers came, but he spotted the little boy, who cannot swim, riding in an old dinghy with others. He dove in. The current was strong, but the sight of the back of his brother's head made him swim harder.

Jafar swam with all his strength, calling out to his brother.

"I was afraid I would lose him," Jafar said. Several others drowned while attempting to cross.

Jafar made it out of the river and onto the bank, where he embraced Shamsul. A fellow villager who saw the two boys during the chaos said he could not believe they lived.

"They are only alive thanks to Allah," said Ali Mia, a local leader. "God saved them."

The boys then followed a stream of people, including some of their neighbors, on a two-day journey on foot to the Bangladeshi border - without food, through burning villages, hearing distant gunfire. Jafar tried to comfort his younger brother. "I kept asking him not to cry," he said.

At the river crossing on the border, a grizzled smuggler refused to take them unless they each paid about $120, the boys said. A neighbor finally agreed to put up the money, and they followed the others to the refugee camp on the Bangladesh side.

Word of Shamsul and Jafar's plight reached Kamal Hossein and his lost-and-found booth, a small kiosk that offers hope for separated families. In September, Hossein, also a refugee from Burma, spent his month's salary to rent a microphone to call out names of lost children, reuniting more than 700 children with relatives and garnering support from the United Nations refugee agency.

After about two weeks, Mohammed Junaid heard of the announcement about his nephews and rushed to the camp to be reunited with them - learning then that his brother was dead.

He and his wife, Jorina, began caring for the boys along with their own six children, ages 1 to 12, in their small bamboo-and-tarpaulin tent, with bags of rice and piles of kindling stacked in the corners and a mud oven to cook meals.

"They are my brother's sons," Junaid said. "I have to look after them. There is no other way."

For the boys, being reunited with extended family has provided some refuge. But it has not staved off the hunger, or grief.

Morning comes early at Thaingkhali, part of a group of camps that has grown to be one of the most densely populated refugee settlements in the world, with more than 800,000 residents. The first call to prayer echoes just after 5:30 a.m., the moon a silver disc still hanging in the sky. It's so cold that Shamsul's lips turn blue, and he shivers in the dawn light, wearing only a thin jacket.

Most days, the boys trudge from their shelter home down the mud steps that have been cut into the hill, and then up again to the small mosque for morning prayers, and perhaps a few Koran lessons at the madrassa.

It had been days since either of the boys had seen the inside of one of the cheerful learning centers set up by UNICEF - just yards away from their tent. Their uncle thinks the madrassa lessons are enough. The brothers roam with no supervision, dust from the dirt pathways caking their bare feet. In the afternoons, the warm sun makes them lazy and they lie around the tent.

Daily soccer games are their only joy. They find flat ground, set up lumps of dirt as goal posts and kick the $2 soccer ball they pooled their coins to buy. Both Shamsul and Jafar smile, chasing the bouncing ball.

Jafar said he misses his school in Tula Toli, which had its own soccer field, not far from the river where he and his brothers used to fish. He's hungry a lot of the time now. The 10-member family gets an allotment of rice, lentils and vegetable oil from the U.N. World Food Program every two weeks, and the uncle's work as a day laborer allows them to buy a few vegetables or dried fish.

Back home, Jafar said, "we had peanuts, green chilies, eggplants. We had everything growing in our own lands. We had so many vegetables to eat, and fresh fish."

Jafar brightens describing the flat river fish, as long as your hand to your elbow, that his mother used to fry with chili and turmeric on top.

He said, he often doesn't feel like playing. His aunt and uncle say he and his brother are often depressed. Jorina, the aunt, said she struggles to find the words to console the two.

The boys face an uncertain future. In the evenings, the fading light casts long shadows from the palm tree leaves, and the air darkens with smoke from thousands of campfires. Men gather in the lanes and around the chai stalls to talk about the latest development - an agreement between Myanmar, also known as Burma, and Bangladesh that would allow them to return home, if they can prove their residency.

Many say that the idea of returning home is unrealistic now, with villages still burning and refugees trickling into Banglade

(This story has not been edited by NDTV staff and is auto-generated from a syndicated feed.)
Comments
RohingyasMyanmarBangladesh

First US Child Coronavirus Death Was Teen In "Good Health"