One Dead, 5 Tourists Missing After Snowmobiles Fall Through Ice In Canada

The group were riding near where a river exits the Saint-Jean lake, and were outside the approved area for snowmobiles, police spokesman Hugues Beaulieu told AFP. 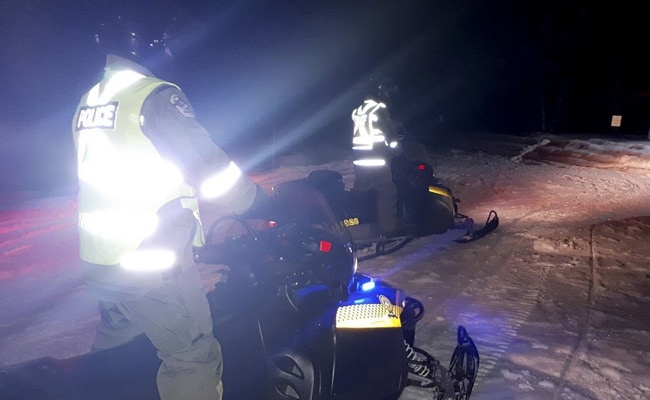 Police on snowmoblies during search and rescue operations near Beemer Island, Quebec. (AFP)

A Canadian guide died and five French tourists were missing after their snowmobiles plunged through ice into freezing water in northern Quebec, Canadian police said Wednesday.

The group were riding near where a river exits the Saint-Jean lake, and were outside the approved area for snowmobiles, police spokesman Hugues Beaulieu told AFP.

Nine people, including the excursion guide, were on the trip when the ice broke underneath them in the dark on Tuesday evening.

Police said they were alerted by two of the tourists who had rescued a third from the water.

The 42-year-old guide, Benoit L'Esperance of Montreal, was pulled out by emergency response teams and taken to hospital, but he died overnight, Beaulieu said, adding "five French tourists are still missing."

Officials said that details of the accident remained unclear.

Survivors were hospitalized in the nearby town of Alma and treated for minor injuries and hypothermia.

Ice on the lake is often very thick, but it is thinner where the lake funnels into the Saguenay River.

The tourists had hired snowmobiles in the village of Saint-Michel-des-Saints, nearly 300 kilometers (185 miles) away by trails, according to Canadian media.

Powerful snowmobiles on skis, which can reach the speed of 140 kilometers per hour, are popular with Quebecers and foreign tourists, but cause numerous accidents each year.

Divers and two helicopters searched the area on Wednesday, alongside the police and army.

"This sector was not part of a marked trail, they were off-piste," said the police spokesman.

Authorities planned to continue searching through the night, while underwater and aerial reconnaissance were to pause until Thursday morning.

Earlier, one of the search helicopters crashed into the icy lake, sending the pilot to hospital, police said.

France's deputy consul general in Quebec, Laurent Barbot, who visited the site, told reporters that the missing French tourists were from the east of France.

The three survivors are "physically doing well, but are in shock," he said.

French television said the survivors hailed from Haut-Rhin. The missing tourists, aged 24 to 58, are Alsatian or Vosgian.

The daily newspaper Dernieres Nouvelles d'Alsace said several of the group were friends who flew to Canada on Sunday.

"People who know the area know that you should not go on the ice because it is very fragile due to strong currents," Gaetan Gagne, president of the Saint-Jean lake snowmobile club, told public broadcaster Radio-Canada.

However the first priority, she told a press briefing, "is to find the missing as soon as possible."

"The government has been in contact since this morning with the French authorities and the families will be notified," she added.

Some worry that the tragedy will harm winter tourism in Quebec. Snowmobiling in particular is very popular with foreign tourists.

There are 33,000 kilometers of marked snowmobiling trails in the Canadian province, according to the local snowmobiling association.

But there are an average of 20 snowmobile deaths each year.

In February 2019, two French tourists, a mother and her son, were killed in a snowmobile accident in a Quebec nature park.