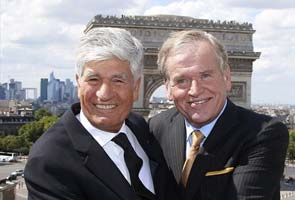 Paris: Omnicom Group Inc. and Publicis Groupe SA say they are combining in a "merger of equals" that will create the world's largest advertising firm, one worth more than $30 billion.

The combined company will be called Publicis Omnicom Group and be jointly led by Omnicom CEO John Wren and Publicis CEO Maurice Levy as co-chief executives. The move is designed to bolster the companies' focus on growing Asian and Latin American markets such as China and Brazil, where they each have ramped up operations to counter lackluster growth in weak European markets.

But although a combined firm will allow for more pricing power in general, the decrease in competition could present regulatory hurdles in the U.S. and Europe. Client conflicts also could be an issue, as rivals such as Coca-Cola Co., PepsiCo, McDonald's, Yum Brands' Taco Bell, Johnson & Johnson and Procter & Gamble now find themselves under the same umbrella.

For the first year, Omnicom Chairman Bruce Crawford will serve as non-executive chairman of the new company. He will be succeeded by Elizabeth Badinter, the current Publicis Groupe chairwoman, and daughter of its founder, for the second year.

Founded in 1986, Omnicom generates just over half of its revenue from U.S. clients, and about one-quarter from European and British markets combined. The company's stock has risen 31 percent in the last 12 months, recently peaking at $67.43 on the New York Stock Exchange.

Omnicom will benefit from Publicis' strategic shift in the last few years toward digital operations, as the French company beefed up its digital marketing profile with the acquisitions of Digitas, Razorfish, Rosetta, Big Fuel and LBi. Publicis, which had revenue of $8.78 billion in 2012, had targeted generating 75 percent of its revenue in digital and fast-growing countries by 2018, according to a recent investor presentation.

And the move gives Publicis, which has faced questions about who will succeed 71-year-old Levy, access to Omnicom's well-regarded senior leadership, said James Dix, an analyst at Wedbush Securities.

Promoted
Listen to the latest songs, only on JioSaavn.com
A major concern, though, is whether the two companies can strike a harmonious balance of power - something that can be difficult in mergers of similar-sized companies based in different countries.

"You have these fiefdoms that keep people from playing together. One company is based in Paris, one is in New York. Where is the power center?" Dix said in an interview Saturday.
Dix expects that top executives are comfortable with the structure of the deal, but the adjustment may be more difficult for the next level of executives who run the firms' units.
"Now they have to fit together into a broader organization," Dix said. "If you lose clients or have defections of senior executives then you have something that looked good on paper but didn't quite play out."
Comments
Omnicom Group IncPublicis Groupe SA