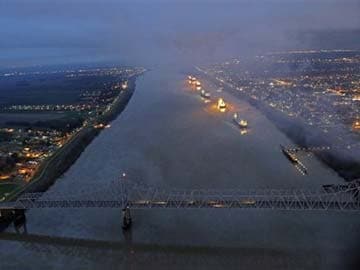 In this aerial photo, river traffic is halted along the Mississippi River between New Orleans and Vacherie, La., due to a barge leaking oil in St. James Parish on Sunday, Feb. 23, 2014.

New Orleans: The Coast Guard says a 65-mile (105-kilometer) stretch of the Mississippi River is closed until further notice while crews clean up oil from a barge that hit a towboat between Baton Rouge and New Orleans.

The collision happened on Saturday afternoon near Vacherie (VASH-uh-ree), 47 miles (76 kilometers) west of New Orleans. In nearby St. Charles Parish, officials say public drinking water intakes on the river are closed as a precaution.

Coast Guard Petty Officer Bill Colclough (KOHL-klah) says the barge was one of two loaded with light crude being pushed by the Hannah C. Settoon. He says it hit the Lindsay Ann Erickson, which was pushing grain barges.

Promoted
Listen to the latest songs, only on JioSaavn.com
Colclough says nobody was hurt and all barges remained secured.

Colclough says officials don't know how much oil spilled, but only a sheen of oil is reported on the river.