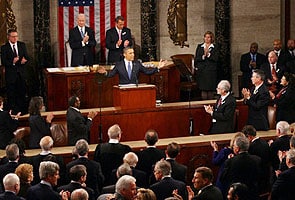 Washington: US President Obama challenged Americans on Tuesday night to unleash their creative spirit, set aside their partisan differences and come together around a common goal of outcompeting other nations in a rapidly shifting global economy.

In a State of the Union address to a newly divided Congress, Mr. Obama outlined what he called a plan to "win the future" -- a blueprint for spending in critical areas like education, high-speed rail, clean-energy technology and high-speed Internet to help the United States weather the unsettling impact of globalization and the challenge from emerging powers like China and India.

"The rules have changed," he said.

But at the same time he proposed budget-cutting measures, including a five-year freeze in spending on some domestic programs that he said would reduce the deficit by $400 billion over 10 years.

Drawing a stark contrast between himself and Republicans, who are advocating immediate and deep cuts in spending, Mr. Obama laid out a philosophy of a government that could be more efficient but would still be necessary if the nation was to address fundamental challenges at home and abroad.

"We need to out-innovate, outeducate and outbuild the rest of the world," he said. "We have to make America the best place on earth to do business. We need to take responsibility for our deficit and reform our government. That's how our people will prosper."

Just weeks after the shooting in Tucson that claimed six lives and left Representative Gabrielle Giffords, Democrat of Arizona, gravely injured, Mr. Obama received a reception that was muted and civil.

There were no boos or a shout of "You lie!" as in speeches past. Many Republicans and Democrats sat side by side -- the first time anyone here can remember such mixing -- and nearly all wore black-and-white lapel ribbons in honor of the dead and injured. Ms. Giffords's colleagues held a seat open for her.

The president's speech, lasting slightly more than an hour, lacked the loft of the inspirational address he delivered in Tucson days after the shooting. But it seemed intended to elevate his presidency above the bare-knuckled legislative gamesmanship that has defined the first two years of his term.

Reaching out to Republicans who have vowed to end the pet projects known as "earmarks," Mr. Obama pledged to veto any bill that contained them. He tried to defuse partisan anger over his health care measure with humor, saying he had "heard rumors" of concerns over the bill, and he reiterated his pledge to fix a tax provision in the measure that both parties regard as burdensome to businesses.

He drew sustained applause when he declared that colleges should open their doors to military recruiters and R.O.T.C. programs now that "Don't Ask, Don't Tell," the policy barring gay men and lesbians from serving openly, has been repealed.

And he tried to charm Republicans by weaving the new House speaker, Representative John A. Boehner of Ohio, into his narrative about American greatness, citing Mr. Boehner's rise from "someone who began by sweeping the floors of his father's Cincinnati bar" as an example of "a country where anything is possible."

Still, the good will lasted only so long. Moments after Mr. Obama finished speaking, Representative Paul D. Ryan of Wisconsin, the chairman of the House Budget Committee, delivered the official Republican response, in which he criticized Mr. Obama as doing too little to attack the deficit.

And Representative Michele Bachmann of Minnesota, who delivered her own Republican critique with the backing of the Tea Party wing, complained that instead of creating "a leaner, smarter government," Mr. Obama had created "a bureaucracy that tells us which light bulbs to buy."

The president sought to use Tuesday night's address to shed the tag of big-government liberal that Republicans have placed on him, and to reclaim the mantle of a pragmatic, postpartisan leader that he used to ride to the presidency in 2008.

With one eye toward his 2012 re-election campaign, Mr. Obama offered a rosy economic vision. The president who once emphasized the problems he had inherited from his predecessor was instead looking forward and making the case that the nation had at long last emerged from economic crisis.

"Two years after the worst recession most of us have ever known, the stock market has come roaring back," Mr. Obama said. "Corporate profits are up. The economy is growing again."

The speech was light on new policy proposals, reflecting both political and fiscal restraints on the administration after two years in which it achieved substantial legislative victories but lost the midterm elections, failed to bring the unemployment rate below 9 percent and watched the budget deficit rise sharply.

Mr. Obama did not address gun control, a hotly debated topic after the shooting in Tucson.

He did not lay out any specific plans for addressing the long-term costs of Social Security and Medicare, the biggest fiscal challenges ahead. He backed an overhaul of corporate taxes but spoke only in passing about the need to simplify the tax code for individuals. He called for legislation to address illegal immigration but provided no details.

He called for an end to subsidies for oil companies and set a goal of reducing dependence on polluting fuels over the next quarter-century, but without any mechanism to enforce it. And in a speech largely devoted to economic issues, he talked only generally about the conflicts in Iraq and Afghanistan.

As he drew a contrast between the United States and other nations, Mr. Obama gave a nod to the nation's high unemployment rate, arguing that "the world has changed" and that it was no longer as easy as it once was for Americans to find a good and secure job.

Government itself, he said, needs to be updated for the information age. "We can't win the future with a government of the past," he said.

He packaged his message in optimistic, almost nationalistic phrasing, saying the country had always risen to challenges.

"So yes, the world has changed," Mr. Obama said. "The competition for jobs is real. But this shouldn't discourage us. It should challenge us. Remember, for all the hits we've taken these last few years, for all the naysayers predicting our decline, America still has the largest, most prosperous economy in the world."

He continued: "No workers are more productive than ours. No country has more successful companies, or grants more patents to inventers and entrepreneurs. We are home to the world's best colleges and universities, where more students come to study than any other place on earth."

Mr. Obama outlined initiatives in five areas: innovation; education; infrastructure; deficit reduction; and a more efficient federal bureaucracy. He pledged to increase the nation's spending on research and development, as a share of the total economy, to the highest levels since John F. Kennedy was president, and vowed to prepare an additional 100,000 science and math teachers over the next 10 years.

He proposed new efforts on high-speed rail, road and airport construction and a "national wireless initiative" that, administration officials said, would extend the next generation of wireless coverage to 98 percent of the population.

"Our infrastructure used to be the best, but our lead has slipped," Mr. Obama said. "South Korean homes now have greater Internet access than we do. Countries in Europe and Russia invest more in their roads and railways than we do. China is building faster trains and newer airports."

Saying it was imperative for the nation to tackle its deficit, Mr. Obama reiterated his support for $78 billion in cuts to the Pentagon's budget over five years, in addition to the five-year partial freeze on domestic spending. But he did not adopt any of the recommendations of the bipartisan fiscal commission he appointed to figure out ways to bring the deficit under control.

Mr. Obama headed into the speech in surprisingly good political shape, given the drubbing Democrats took in the November elections. His job approval ratings are up -- in some polls, higher than 50 percent. The public is feeling more optimistic about the economy, voters are giving Mr. Obama credit for reaching out to Republicans in a bipartisan way, and the president won high marks for his speech in Tucson after the shooting.

"There's a reason the tragedy in Tucson gave us pause," Mr. Obama said Tuesday night. "Amid all the noise and passions and rancor of our public debate, Tucson reminded us that no matter who we are or where we come from, each of us is a part of something greater -- something more consequential than party or political preference."