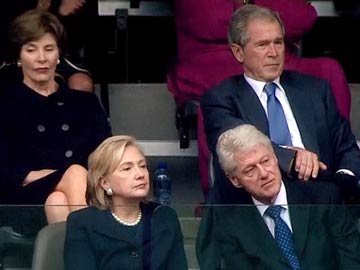 Johannesburg: President Barack Obama, his predecessor, and the woman who might be his successor crossed the Atlantic together Monday in an example of extended bipartisan togetherness to pay tribute to Nelson Mandela at a memorial service Tuesday.

For more than 16 hours, Obama hosted former President George W. Bush and former Secretary of State Hillary Rodham Clinton aboard Air Force One - part of a global pilgrimage that is expected to bring as many as 100 world leaders to South Africa.

The flight of political opposites was a midair testimonial to the profound impact that Mandela had on generations of American politicians as he fought against his government's system of racial oppression and later brought unity and reconciliation to a divided people as their president.

And the journey was a continuation of the tradition among the tiny group of ex-presidents of building relationships at 30,000 feet.

Gerald Ford and Jimmy Carter bonded in 1981 on a flight to the funeral of the slain Egyptian president, Anwar Sadat. And George H.W. Bush and Bill Clinton became fast friends on a long flight to Asia after the killer tsunami of 2005.

Bill Clinton did not travel aboard Air Force One on Monday; he and his daughter, Chelsea, were in Rio de Janeiro for a conference and are traveling to South Africa separately. Carter, a longtime friend of Mandela's, is also making his way to Africa on his own for the memorial. The elder Bush is not making the trip to South Africa, aides said.

On board the presidential aircraft as it flew to South Africa, White House aides said Obama and the first lady, Michelle Obama, Hillary Clinton and George W. Bush, along with Bush's wife, Laura, congregated at times in the conference room during the early part of the trip.
"There have been very good conversations in that room," said Jay Carney, the current White House press secretary.

At other times, aides said, the Obamas retreated to the presidential cabin that he inherited from George W. Bush. The Bushes stayed in the medical office just behind Barack Obama's cabin. Hillary Clinton spent some time in the senior staff cabin, aides said.

Space is always at a premium on flights with so many VIP guests.

During the 2005 flight to Asia for tsunami relief, Bill Clinton let the elder Bush have the only bed on the government plane, while he stretched out on the floor, and the two discovered they liked each other.

"I thought I knew him," the elder Bush later wrote, "but until this trip, I did not really know him."

On the flight to the 1995 funeral of Prime Minister Yitzhak Rabin of Israel, Bill Clinton relegated Newt Gingrich, the speaker of the House, to a seat toward the back of the plane and spent little time talking with him. Gingrich's subsequent public complaint that he was forced to deplane from the back earned him ridicule, including a New York Daily News front page cartoon depicting him as a wailing infant under the headline "Cry Baby."

On Monday, the younger Bush twice strayed to the back of the modified Boeing 747, where about a dozen reporters sit, to chat - off the record - with them for about 90 minutes. Hillary Clinton also visited with reporters on the plane just after it stopped for refueling in Dakar, Senegal.

White House aides said Barack Obama continued to work on the flight for what were expected to be remarks of 10 to 15 minutes at the memorial. Officials said the president would probably remind those watching that Mandela's success in life was not preordained.

"Sometimes when you look back, when the story has a happy ending, it all seems as if it was meant to be," Ben Rhodes, a deputy national security adviser, told reporters on the plane. "I think one of the points the president will make is that it took decades of persistence and talent and a wide range of very unique skills to make Nelson Mandela the figure that he was and make him capable of bringing about that change."

Barack Obama has said repeatedly that his earliest political activism was on behalf of Mandela's cause. A young Barack Obama offered a few words at an anti-apartheid rally in the early 1980s. Obama has written that he later drew inspiration from Mandela's single term as president.

But Mandela was largely gone from the public stage by the time Barack Obama entered the Oval Office. Mandela's age and failing health prevented all but a fleeting meeting between the two men.

Mandela was also out of office by the time the younger Bush became president. In 2002, the American president awarded Mandela the Presidential Medal of Freedom, though the former South African leader was unable to attend the ceremony. Bush hosted Mandela at the White House in 2005 and later visited him in South Africa. The two men discussed how to stem the AIDS crisis in Africa, a major interest of Bush's.

In his statement upon Mandela's death, Bush called him "one of the great forces for freedom and equality of our time" and said that "this good man will be missed."

But the exchanges between the two men were not always positive. While Mandela supported the American intervention in Afghanistan soon after the Sept. 11, 2001, terrorist attacks, he was critical of the war in Iraq. Mandela criticized the American president for invading Iraq against what the South African leader said was international law as set by the United Nations.

"For anybody, especially the leader of a super state, to act outside the United Nations is something that must be condemned by everybody," Mandela said.

Of the three, Hillary Clinton has known Mandela the longest. She met him in 1992, just two years after his release from prison and before his election to the South African presidency.

Hillary Clinton attended Mandela's inauguration in 1994; three years later, he served as her personal tour guide in his former prison, showing Hillary Clinton, then the first lady, the small cell on Robben Island where he spent the majority of his 27 years behind bars.

As secretary of state, Hillary Clinton returned to South Africa in 2011, visiting Mandela in the village of Qunu where he will be buried on Sunday. Already quite ill, Mandela posed for pictures with Hillary Clinton, who declared, "That's a beautiful smile." Bill Clinton and Chelsea Clinton made a similar visit to Qunu a month earlier, to help celebrate Mandela's 94th birthday.

Promoted
Listen to the latest songs, only on JioSaavn.com
(Peter Baker contributed reporting from Washington.)