Obama beats Romney in a bullfight in Kenya 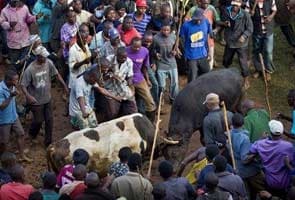 Khayega, Kenya: If the US presidential election were to be determined by a bull fight in Kenya then President Barack Obama would defeat Mitt Romney.

On Saturday villagers from western Kenya town of Khayega held a bull fighting contest between a 900 pound (410 kilogram) black bull they named Obama and a black and white 1,000 pound (460kg) bull they named Mitt Romney. Both are cattle breeds indigenous to Kenya.

Despite being smaller in size, Obama was the overwhelming favourite having won six of his last fights and he did not disappoint. After close to half an hour the bulls were separated and Obama was declared winner. Happy villagers burst onto the streets in song and dance rejoicing the victory, some carrying placards reading "Obama top most!" while others reading "Romney Can't!"

Most Kenyans consider Obama, the son of a white mother from Kansas and a black father from Kenya, as one of their own.

Promoted
Listen to the latest songs, only on JioSaavn.com
"Here at home it's clear now that Romney can't beat Obama. He has no experience of speaking at state house and to other heads of states but Obama has what is takes as he respects the people, he is kind and humble. Romney doesn't stand a chance against Obama, "said Stephen Shikoli, 35, a spectator.

Bull fighting has been held in Khayega town for generations but attempts last year to bring the event to the national stage attracted the wrath of animal rights groups. Paul Shiboko one of the event's organizers said it is a great honour to be an owner of a winning bull, aside from the prize money. Shiboko said bulls are usually bred to fight and sometimes named after both famous and infamous international newsmakers to create a frenzy among the spectators, like Saddam versus Bush.
Comments
Barack ObamaMitt Romney