Now, to find a parking spot, drivers look on their phones 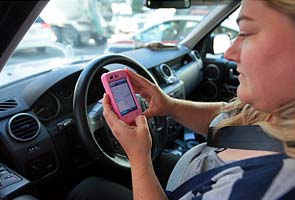 San Francisco: It is the urban driver's most agonizing everyday experience: the search for an empty parking place.

It is part sleuthing and part blood sport. Circling, narrowly missing a spot, outmaneuvering other motorists to finally ease into a space only to discover that it is off limits during working hours.

In this city, it is also a vexing traffic problem. Drivers cruising for parking spots generate 30 percent of all downtown congestion, city officials estimate.

Now San Francisco professes to have found a solution -- a phone app for spot-seekers that displays information about areas with available spaces.

The system, introduced last month, relies on wireless sensors embedded in streets and city garages that can tell within seconds if a spot has opened up.

Monique Soltami, a TV food and wine reporter, said she and her sister spent 25 minutes on Friday trying to park. "We were praying to the parking god that we'd find a spot," she said. "If we had the app, we would not have to pray to the parking god."

But the system could come with serious consequences. Safety advocates say that drivers on the prowl for parking could wind up focusing on their phones, not the road.

"It could be really distracting," said Daniel Simons, a professor of psychology at the University of Illinois, where he studies the science of attention. And, he said, it could also be dangerous: "Most people are looking for parking spaces in places that have a lot of traffic and a lot of pedestrians."

City officials acknowledge the potential problem. They are urging drivers to pull over before they pull up the city's iPhone app, or to do so before they leave home. But the spots can disappear quickly, as any circling driver knows, and for plugged-in motorists in the habit of texting or glancing at the GPS, the urge to use the parking app is certain to mount as the frustration does.

Nathaniel Ford, executive director of the San Francisco Municipal Transportation Agency, said safety could actually improve if drivers quickly found a spot instead of circling and getting frustrated. "I get you off the streets as quickly as possible," he said.

City drivers can testify to the frustration. Ms. Soltami drives into the city several times a week, she said, and spends 20 to 30 minutes searching for a spot each time. "That's at least an hour I lose every week just looking for parking. It's very frustrating," she said.

She said she had heard about the new app, but had not yet downloaded it.

The $20 million parking project here, called SFpark, is backed by the Transportation Department and the Federal Highway Administration, which are looking into how to ease congestion and driver angst by making the most of limited parking.

San Francisco has put sensors into 7,000 metered parking spots and 12,250 spots in city garages. If spaces in an area open up, the sensors communicate wirelessly with computers that in turn make the information available to app users within a minute, said Mr. Ford, of the transportation agency. On the app, a map shows which blocks have lots of places (blue) and which are full (red).

San Francisco's is by far the most widespread approach that several cities, universities and private parking garages are experimenting with.

Last December, Los Angeles worked with a company called Streetline to introduce a system covering spaces in West Hollywood, and it is expanding the program elsewhere. Streetline has since set up smaller projects on Roosevelt Island in New York City's East River, as well as at the University of Maryland and in Forth Worth, Tex.

More than 12,000 people have downloaded San Francisco's app, which is available now only for the iPhone but which city officials say they hope to bring to all similar devices.

Eventually officials hope to be able to make regular adjustments to pricing on parking meters -- which can be programmed remotely -- and at garages so they can spread out demand, raising prices in areas where competition is fiercest and lowering it elsewhere.

Donald Shoup, a professor of urban planning at the University of California, Los Angeles, who studies parking issues and is serving as an adviser on the San Francisco project, said cities and traffic experts were closely watching the federally funded experiments in San Francisco and Los Angeles.

"If it works in San Francisco, the whole world will take notice," Professor Shoup said.

Research conducted by Professor Shoup found that drivers looking for parking in a particular 15-block district in Los Angeles drove an estimated 950,000 miles a year, equivalent to four trips to the moon.

Those wasted miles are bad for the environment, driver anxiety, the efficiency of bus systems and pedestrian safety, Mr. Ford said. San Francisco has the dubious honor of having the highest rate among big cities for accidents involving pedestrians and cars.

When it is started up, the city's parking app warns drivers not to use the system while in motion. But safety advocates said that might not be sufficient. After all, they say, texting while driving is illegal in California and in many states, but a number of surveys, including one by the Pew Research Center, show that many Americans do it anyway. .

"It's an innovative idea," she said. "The safe way for people to use the device is for them to pull over, which they know they should do. The question is whether they will."

But Ms. Soltami, the TV reporter, said using the app would probably join the array of activities already performed by drivers.

"We're already looking at Google Maps and Facebook on the phone while we drive," she said. "Aren't we always looking at something on our phone, or changing the radio, or drinking coffee? You're always slightly distracted when you're driving."
Comments
parking appphone apps