Not Cut Out For The Job: Thai Prime Minister's Stunt Bemuses Public

Talking to reporters outside Government House on Monday, Prayut Chan-O-Cha turned the media's attention to the life-size likeness after an aide dutifully placed the cut-out in front of a microphone. 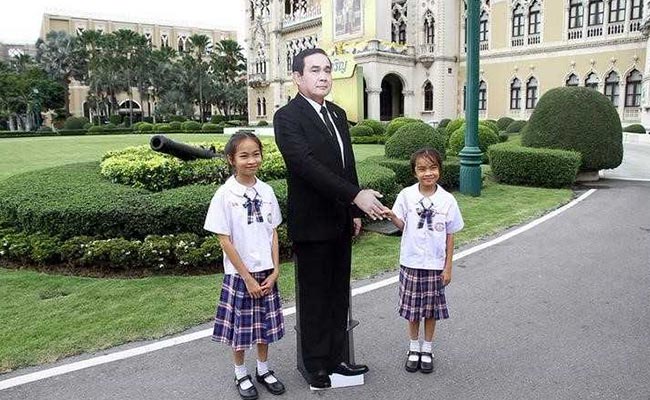 Bangkok: Thais were left bemused by the latest antics of Thai junta leader Prayut Chan-O-Cha after he told reporters to direct any serious questions to a cardboard cut-out of himself.

Talking to reporters outside Government House on Monday, Prayut turned the media's attention to the life-size likeness after an aide dutifully placed the cut-out in front of a microphone.

"Whoever wants to take a picture, ask political questions... about conflict... ask this guy," Prayut joked before saying "bye bye" and flashing sign language for 'I love you' before swaggering away.

His humorous approach to the media did not go unnoticed by Thai social media users.

Many were left befuddled by Prayut's casual attitude to media scrutiny.

Others said it was in character for an authoritarian former general who has stamped out dissent since seizing power four years ago.

"If you don't have the ability to answer people's questions, how can you solve people's problems?" Phanuphong Thongfueang posted on Facebook.

Some were less charitable. Prayut "is an idiot" was a common refrain among many Facebook comments on the subject on Tuesday.

Another Facebook post by Pinyo San accused Prayut, who is also Thailand's prime minister, of showing "bad manners" while calling out Thailand's downtrodden media for being pliant before the kingdom's military ruler.

Since seizing power in a 2014 coup by deposing then-Prime Minister Yingluck Shinawatra, Prayut has developed a reputation for his rough treatment of the media.

On separate occasions, he has tossed a banana peel at a cameraman, threatened to smack someone with his podium and pulled a reporter by the ear.

Promoted
Listen to the latest songs, only on JioSaavn.com
Many Thais now believe he is remodelling himself as a fun-loving, likable character -- instead of a grim-faced ex-general -- in time for elections slated for later this year.

Last week Prayut told reporters he was no longer an army man but a "politician" -- although he has been coy on whether he will seek to become the country's first civilian leader since Yingluck.