Defections across the closely guarded inter-Korean frontier are rare, and this one comes as the neighbours pursue a delicate reconciliation process. 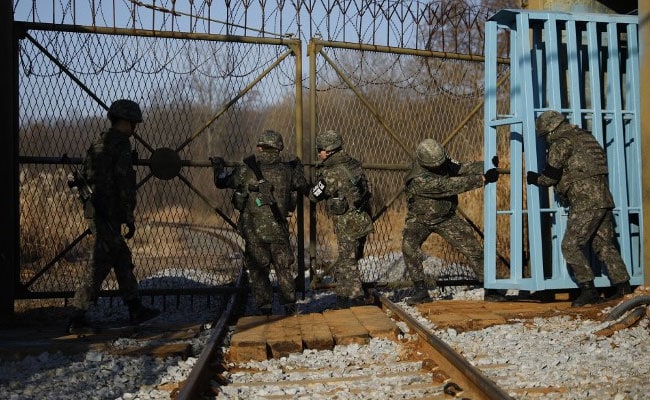 A North Korean soldier defected to South Korea across the eastern land border on Saturday, the South's military said.

Defections across the closely guarded inter-Korean frontier are rare, and this one comes as the neighbours pursue a delicate reconciliation process.

"The soldier is safely in our custody," it said. "Related agencies plan to investigate him regarding the details of how he came to the South."

Even as talks on denuclearisation between Washington and Pyongyang have stalled, the two Koreas are pushing ahead with a reconciliation process, taking steps to ease tensions along their heavily fortified border.

They have begun work to reconnect their railway systems, removed landmines and destroyed military bunkers at parts of the frontier.

More than 30,000 North Korean civilians have fled their homeland but most flee across the porous frontier with China, and rarely across the inter-Korean border which is fortified with minefields and barbed wire.

The last defection involving North Koreans occurred in May when two civilians aboard a small boat defected to the South across the Yellow Sea.

In November last year, a North Korean soldier drove to the heavily guarded border at speed and ran across under a hail of bullets from his own side.

He was hit multiple times in the dramatic defection at the Panmunjom truce village.

In 2012, a North Korean soldier walked unchecked through rows of electrified fencing and surveillance cameras, prompting Seoul to sack three field commanders for the security lapse.

(Except for the headline, this story has not been edited by NDTV staff and is published from a syndicated feed.)
Comments
North Korean soldierSouth Korea borderdenuclearisation