Pyongyang said it was "carefully examining" a plan to strike Guam, an island of around 162,000 in the western Pacific. 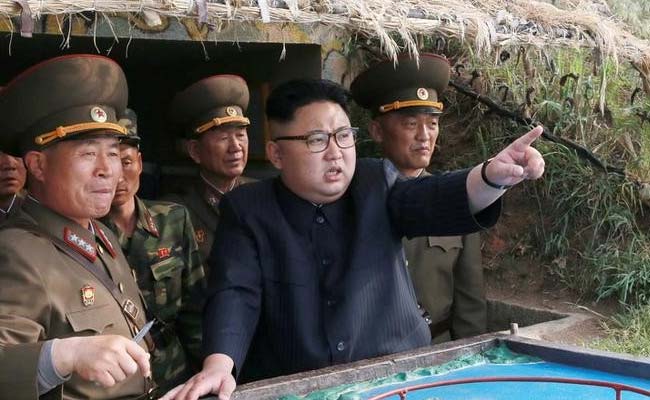 Seoul/Bedminster, N.J.: North Korea said on Wednesday it is considering plans for a missile strike on the U.S. Pacific territory of Guam, just hours after President Donald Trump told the North that any threat to the United States would be met with "fire and fury".

The ratcheting up in tensions rattled global financial markets and prompted warnings from U.S. officials and analysts not to engage in rhetorical slanging matches with North Korea.

Pyongyang said it was "carefully examining" a plan to strike Guam, an island of around 162,000 in the western Pacific and the site of a U.S. military base that hosts a submarine squadron, an airbase and a Coast Guard group.

A Korean People's Army (KPA) spokesman, in a statement carried by state-run KCNA news agency, said the plan would be put into practice at any moment once leader Kim Jong Un makes a decision.

In another statement citing a different military spokesman, North Korea also accused the United States of devising a "preventive war" and said any plans to execute this would be met with an "all-out war wiping out all the strongholds of enemies, including the U.S. mainland".

Washington has warned it is ready to use force if need be to stop North Korea's ballistic missile and nuclear programmes but that it prefers global diplomatic action, including sanctions.

Speaking to reporters in New Jersey on Tuesday, Trump issued his strongest warning yet for North Korea.

"North Korea best not make any more threats to the United States. They will be met with fire and fury like the world has never seen," Trump said.

The U.N. Security Council unanimously imposed new sanctions on North Korea on Saturday over its continued missile tests, that could slash the reclusive country's $3 billion annual export revenue by a third.

North Korea has made no secret of plans to develop a nuclear-tipped missile able to strike the United States and has ignored international calls to halt its nuclear and missile programmes.

It says its intercontinental ballistic missiles (ICBMs) are a legitimate means of defence against perceived U.S. hostility. It has long accused the United States and South Korea of escalating tensions by conducting military drills.

The U.S. dollar index edged down and the safe-haven yen strengthened against the U.S. currency after North Korea's response. Asia stocks dipped, with South Korea's benchmark index and Japan's Nikkei both falling 0.5 per cent.

The United States has remained technically at war with North Korea since the 1950-53 Korean conflict ended in an armistice rather than a peace treaty.

On Monday, two U.S. B-1 bombers flew from Guam over the Korean Peninsula as a part of its "continuous bomber presence," a U.S. official said, in a sign of the strategic importance Guam holds.

The alert status at Andersen Airforce Base on Guam had not been changed as of Wednesday morning, according to the duty officer at the base's public affairs office.

Republican U.S. Senator John McCain said Trump should tread cautiously when issuing threats to North Korea unless he is prepared to act.

"I take exception to the president's comments because you got to be sure you can do what you say you're going to do," he said in a radio interview.

The Washington Post reported on Tuesday that North Korea has successfully produced a miniaturised nuclear warhead that can fit inside its missiles, according to a confidential U.S. intelligence assessment.

But U.S. intelligence officials told Reuters that while North Korea has accelerated its efforts to design an ICBM, a miniaturised nuclear warhead, and a nosecone robust enough to survive reentry through the Earth's atmosphere, there is no reliable evidence it has mastered all three, much less tested and combined them into a weapon capable of hitting targets in the United States.

Former U.S. diplomat Douglas Paal, now with the Carnegie Endowment for International Peace think tank in Washington, said Trump should not get into a war of words with Pyongyang.

"It strikes me as an amateurish reflection of a belief that we should give as we get rhetorically. That might be satisfying at one level, but it takes us down into the mud that we should let Pyongyang enjoy alone," said Paal, who served as a White House official under previous Republican administrations.

Lockheed Martin Corp, the Pentagon's No. 1 weapons supplier, said on Tuesday its customers are increasingly asking about missile defence systems.