Speaking at the Demilitarized Zone (DMZ), Kamala Harris said US commitment to South Korea's defence was "ironclad", adding that the allies were "aligned" in their response to North's weapons programs. 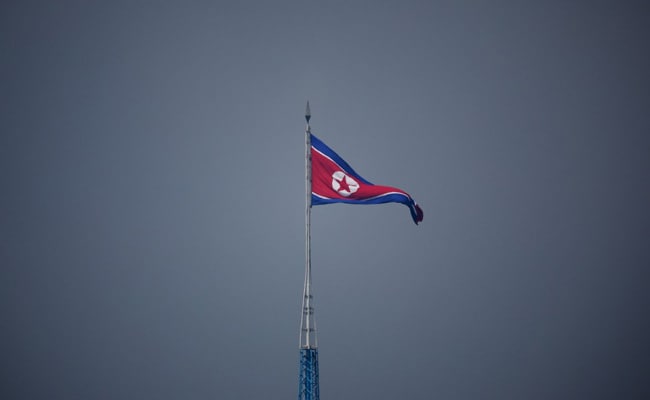 A North Korean flag flutters at the propaganda village of Gijungdong in North Korea.

The South's military said it had detected the launch of "two short-range ballistic missiles from the Sunchon area in South Pyongan province".

"Our military has reinforced monitoring and surveillance and is maintaining utmost readiness in coordination with the US," Seoul's Joint Chiefs of Staff said in a statement.

While in South Korea, Ms Harris toured the country's heavily fortified border with the nuclear-armed North, part of a trip aimed at strengthening the security alliance with Seoul.

Speaking at the Demilitarized Zone (DMZ), Kamala Harris said the US commitment to South Korea's defence was "ironclad", adding that the allies were "aligned" in their response to the growing threat posed by the North's weapons programs.

Washington has about 28,500 troops stationed in South Korea to help protect it from the North, and the allies are conducting a large-scale joint naval exercise this week in a show of force.

The North fired a short-range ballistic missile (SRBM) on Sunday and two SRBMs on Wednesday, Seoul and Tokyo said.

Under the South's hawkish new President Yoon Suk-yeol, Seoul and Washington have boosted joint military exercises, which they insist are purely defensive.

North Korea sees them as rehearsals for an invasion.

Seoul announced Thursday that it would hold trilateral anti-submarine drills with Japan and the US, the first such exercises since 2017.

South Korean officials said this weekend they had detected signs Pyongyang could be preparing to fire a submarine-launched ballistic missile.