Amid Tensions With US, North Korea Shows Off New Missiles In Huge Parade 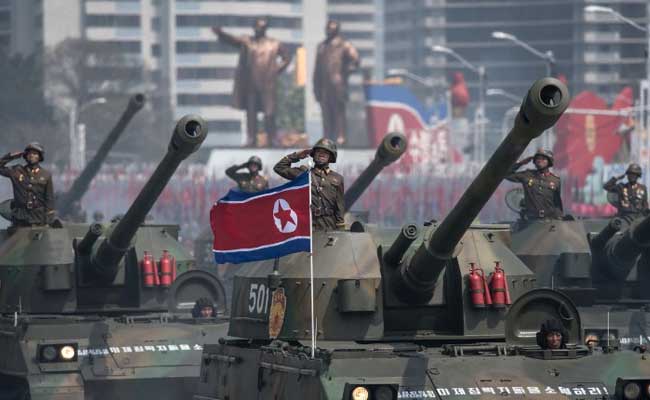 Tokyo: North Korea put on a huge military spectacle Saturday to celebrate its founder's birthday, parading its series of new and technologically advanced missiles in front of Kim Jong Un, and in a defiant show of force in front of the world.

North Korea did not, however, carry out another nuclear test or ballistic missile launch, against widespread speculation that it would seek to celebrate Kim Il Sung's 105th birthday with a bang.
April 15 is the most important day in the North Korean calendar, and Kim Jong Un has celebrated his grandfather's birthday with great fanfare as a way to boost his own legitimacy as the successor to the communist dynasty.

North Korea presented two of its newest missiles at the parade in Kim Il Sung Square on Saturday, including the submarine-launched ballistic missile it successfully fired last year and the land-based version it launched last month.

"And there were a lot of them," said Melissa Hanham, an expert at the James Martin Center for Nonproliferation Studies in California.
"The signal that they're trying to send is that they are moving ahead with solid-fuel missiles," she said.

North Korea has been working on solid fuel, which means missiles are ready to fire and don't need loading with propellant like its previous liquid-fuel missiles, as a way to fire missiles quickly and without detection by satellites.

It did not show off the KN-08 and KN-11 intercontinental ballistic missiles it had included in previous parades, the long-range rockets with the technical ability to reach the mainland United States that it is developing. But it instead put fuel canisters on the trucks that had carried the ICBMs previously, suggesting they wanted to reinforce the message that it can not fuel these longer-range missiles.

The parade took place amid stern warnings from the outside world, and mounting fears about some kind of military action in the region.
The United States has sent an aircraft carrier strike group to the Korean Peninsula region, and Trump has repeatedly tweeted that if China will not use its leverage to rein in North Korea, the United States will act.

Vice President Mike Pence arrives in Seoul on Sunday on the first leg of an Asia tour, and he will doubtless underscore Washington's strong alliances with South Korea and Japan and their determination to stop North Korea's nuclear weapons program. 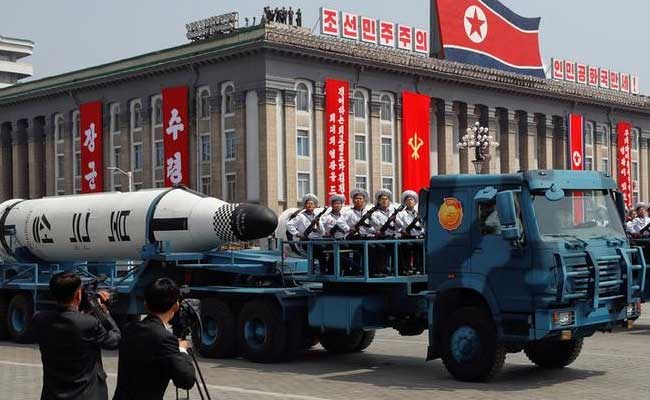 North Korea presented two of its newest missiles at the parade in Kim Il Sung Square (Reuters)
China on Friday urged the United States and North Korea not to push their recriminations to a point of no return and allow war to break out on the Korean Peninsula.

Foreign Minister Wang Yi said "storm clouds" were gathering, an apparent reference to North Korean preparations to conduct a new nuclear test and the United States' deployment of a naval strike force to the waters off the peninsula. In addition, the U.S. military has been conducting large-scale exercises with South Korean forces, drills that the North considers provocative.

"The United States and South Korea and North Korea are engaging in tit for tat, with swords drawn and bows bent," Wang said at a news conference after meeting with visiting French Foreign Minister Jean-Marc Ayrault, Xinhua reported. "We urge all parties to refrain from inflammatory or threatening statements or deeds to prevent irreversible damage to the situation on the Korean Peninsula."

Later Friday, Wang called his Russian counterpart Sergei Lavrov and said it was in both countries' interests to stop war breaking out. "China welcomes close collaboration with Russia to cool down the Korean Peninsula situation as quickly as possible and encourage the involved parties to resume dialogue," he said, according to China's foreign ministry.

Separately, China's Global Times newspaper said the U.S. decision to drop "the mother of all bombs" on Afghanistan this week would have sent a "shock wave" all the way to North Korea but might send the wrong signal to Kim Jong Un - that without nuclear weapons he would suffer the same fate as Iraqi leader Saddam Hussein and Libya's Muammar Gaddafi.

"It would be nice if the bomb could frighten Pyongyang but its actual impact may just be the opposite," the paper said.

Trump administration officials describe the situation as more dangerous than in the past, because of the progress North Korea has made in its nuclear and missile programs and because of the hostility on both sides. But U.S. officials said no decision has been made about how to respond to any new test - nuclear or ballistic - by North Korea.

While officials do not rule out other actions, they also stress their desire to ensure that the situation does not escalate out of control. Pentagon officials denied recent media reports that the Trump administration is ready to launch a preemptive strike if North Korea appears to be about to conduct a nuclear test.

North Korea Friday accused President Donald Trump of "making trouble" with his "aggressive" tweets, amid concerns that tensions between the two countries could escalate into military action.

"Trump is always making provocations with his aggressive words," Han Song Ryol told the Associated Press in an interview in Pyongyang. "So that's why. It's not the DPRK but the U.S. and Trump that makes trouble," he said, using the abbreviation for the Democratic People's Republic of Korea, as North Korea is officially known.

Han also repeated the regime's common refrain that North Korea is ready to act to defend itself.

"We've got a powerful nuclear deterrent already in our hands, and we certainly will not keep our arms crossed in the face of a U.S. preemptive strike," Han told the AP.

His message chimed with a statement Friday from North Korea's Institute for Disarmament and Peace that it was the United States pushing the Korean Peninsula, "the world's biggest hotspot," to the brink of war by bringing back a naval strike group.

"This has created a dangerous situation in which a thermonuclear war may break out any moment on the peninsula and pose a serious threat to the world's peace and security," the statement said.

North Korea has a habit of fueling tensions to increase the rewards it might extract from the outside world if it desists. Previously, the North has agreed to return to denuclearization talks in return for aid or the easing of sanctions.

The North Korean army meanwhile threatened to annihilate U.S. military bases in South Korea and the presidential palace in Seoul in response to what it called Trump's "maniacal military provocations."

With his approach, Trump is tearing up the old playbook of how to deal with North Korea, analysts said.

"This approach to North Korea is relatively new," said James Kim of the Asan Institute of Policy Studies in Seoul. "The approach in the past has been very calculated."

That has gone out the window with talk about military options, he said. "We always knew all these options were there, but no one was bold enough to go down that path. It's a new approach."
Some in Beijing are noticing the shift, too.

"It should be noted that there is a personality difference between Trump and Obama," the Global Times newspaper wrote Friday. The paper does not speak for the Chinese government on policy but often reflects a strain of thinking within the Communist Party.

"Trump is also willing to show he is different. Bombing Syria helps him to show that," it continued, while noting that he was far from "revolutionary" because he dispatched only missiles, not troops.

But North Korea could prove different if it ignores Trump's warning and conducts another nuclear test, the paper said. "Trump just took the office; if he loses to Pyongyang, he would feel like he had lost some prestige."

Right now, Trump has some cards to play, said Kim of the Asan Institute.

"He might say: 'If you want one less battleship in the region, what are you going to give me?' " he said - a reversal of the usual situation, in which North Korea asks what it can get from its adversaries in return for changing its behavior.

Trump's tweets and his conversations with Chinese President Xi Jinping seem designed to push Beijing to crack down on North Korea, and there have been some indications that China is getting tougher on its errant neighbor.

China suspended coal imports from North Korea in mid-February - potentially cutting off an economic lifeline - and Chinese customs data released Thursday showed a 52 percent drop in imports in the first three months of this year, compared with the same period last year.

Meanwhile, the Japanese government is taking precautions of its own.

Its National Security Council has discussed how to evacuate the roughly 60,000 Japanese nationals living in South Korea and how to deal with a potential influx of North Koreans, according to multiple local reports. These plans include sifting out spies or soldiers who might be among the refugees.

The North Korean situation is getting more serious, Prime Minister Shinzo Abe said Friday. "We cannot turn away from this reality. The security environment surrounding Japan is getting tougher."

(The Washington Post's Denyer and Jin Xin in Beijing and William Branigin and Missy Ryan in Washington contributed to this report.)

(Except for the headline, this story has not been edited by NDTV staff and is published from a syndicated feed.)
Comments
North KoreaNorth Korea Missile ParadeNorth Korea US relationsKim Jong Un