No UN Breakthrough: Iran Rules Out Talks As US Intensifies Sanctions 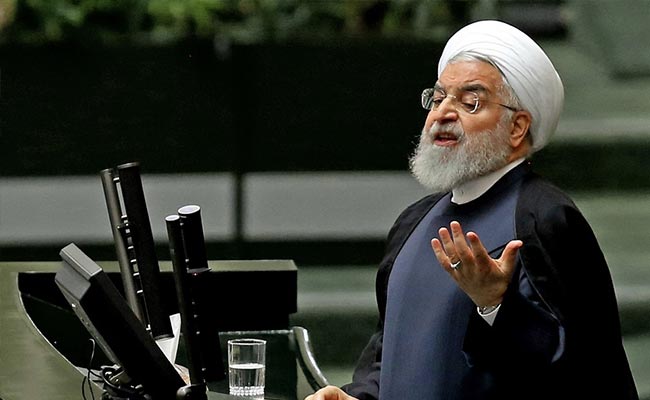 French President Emmanuel Macron had shuttled between his US and Iranian counterparts over two days at the United Nations, trying to arrange a historic encounter that he hoped could reduce the risk of all-out war in the Middle East.

But Iranian President Hassan Rouhani, addressing the UN General Assembly, said he would refuse talks so long as the United States maintains its economic pressure.

"I would like to announce that our response to any negotiation under sanctions is negative," Rouhani said.

He dismissed the idea of a photo-op with Trump, who is fond of drama and held three made-for-television meetings with North Korean leader Kim Jong Un.

"Memento photos are the final stage of negotiations, not the first one," he said.

He doubted the sincerity of the Trump administration to negotiate, pointing to officials' boasts of applying "the harshest sanctions in history" against Iran.

"How can someone believe them when the silent killing of a great nation, and pressure on the lives of 83 million Iranians, especially women and children, are welcomed by American government officials?"

"The Iranian nation will never, ever forget and forgive these crimes and these criminals," he said.

Trump had already ruled out easing economic pressure and, hours before Rouhani's speech, his administration said it was stepping up sanctions.

"We're telling China, and all nations -- know that we will sanction every violation of sanctionable activity," Pompeo told a pressure group opposed to Iran's clerical regime on the sidelines of the United Nations.

China, which is embroiled in a trade war as well as myriad other disputes with the United States, is believed to be the biggest foreign buyer of Iranian oil.

The Trump administration in May said it would unilaterally force all countries to stop buying Iran's oil, its major export, sending tensions soaring.

The United States blamed Iran for an attack earlier this month on the oil infrastructure of rival Saudi Arabia, which is waging a devastating offensive in Yemen.

France, Britain and Germany this week said they agreed with the US findings.

Pompeo, speaking later at a news conference with Trump, said the United States had found a united front at the United Nations on Iran -- but was open to talks.

"We want a peaceful resolution with the Islamic Republic of Iran," Pompeo said.

"In the end, it'll be up to the Iranians to make that decision, or whether they'll choose violence and hate."

But the European powers, while criticizing Iran, believe that diplomacy is the best way forward.

The Europeans remain part of a nuclear accord negotiated by former US president Barack Obama, under which Iran drastically reduced its nuclear program in return for unmet promises of sanctions relief.

EU foreign policy chief Federica Mogherini acknowledged struggles to preserve the pact, from which Iran has stopped strict compliance as it presses for economic benefits.

"I will not hide that it is increasingly difficult to do it," she told reporters after talks among European powers.

"We will try and continue keeping the agreement in place and overcome the difficulties we are facing," she said.

Prime Minister Shinzo Abe of Japan, which has longstanding relations with Iran despite Tokyo's alliance with the United States, vowed to keep working to jumpstart talks.

"Japan will continue to spare no effort in patiently and persistently seeking dialogue to ease tensions and realize peace and stability in the region," Abe said.

After weeks of speculation over a possible meeting, Trump's attention was likely elsewhere on Wednesday.

Leaders of the rival Democratic Party have opened an impeachment inquiry against him over allegations he pressured Ukraine's president to investigate the son of his potential 2020 presidential rival Joe Biden.