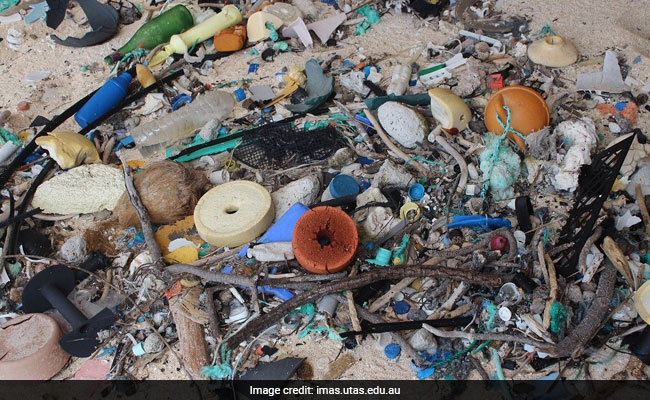 Researchers have warned that Henderson Island is one of the worst affected by pollution.

Henderson Island, an uninhabited atoll in the South Pacific, is so isolated that it's one of the few places in the world "whose ecology has been practically untouched by a human presence."

That is, at least, according to its description by a United Nations group, which named Henderson Island a UNESCO World Heritage site in 1988.

"The inhospitable nature of the island, together with its remoteness and inaccessibility, has so far effectively ensured its conservation," UNESCO stated. "As a near-pristine island ecosystem, it is of immense value for science."

In reality, the remote island has become the final resting place for an estimated 38 million pieces of garbage, according to researchers who arrived on its shores in 2015 and were stunned to find the atoll's once-undisturbed white-sand beaches littered with trash. Nearly all of it was made of plastic.

Researchers believe that about 3,500 pieces of trash are continuing to wash up there daily, and that Henderson Island now has the highest density of plastic waste in the world, according to a report published Tuesday in the scientific journal Proceedings of the National Academy of Sciences. 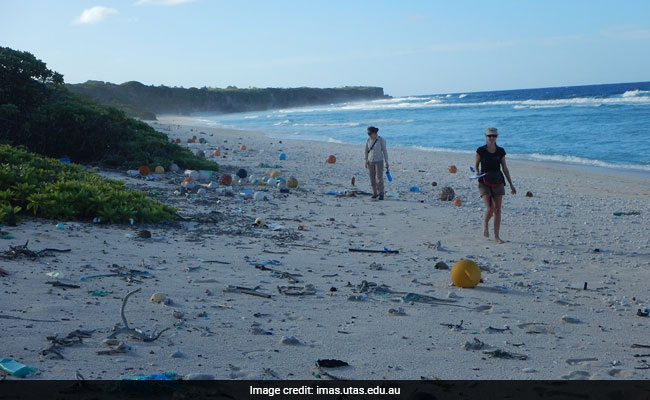 "The quantity of plastic there is truly alarming," Jennifer Lavers, a co-author the report, told the Associated Press. "It's both beautiful and terrifying."

Images provided by Institute for Marine and Antarctic Studies at the University of Tasmania, where Lavers is a research scientist, show thousands of brightly colored items strewn upon Henderson Island's sands: water bottles, pieces of netting, plastic helmets, garden containers and other debris so broken down that its original purpose is unrecognizable.

The dramatic accumulation is the result of human activity from thousands of miles away, the report states. Henderson Island is uninhabited and its closest neighbor, Pitcairn Island, lies about 70 miles to the west and is home to only about 40 people. The nearest major population center is more than 3,000 miles away.

However, Henderson Island also happens to be situated on the western edge of a circular system of ocean currents called the South Pacific Gyre, according to the report. Because of its location and the movement of those currents, the island naturally becomes a repository for floating debris from around the world - despite not being home to a single human.

For about three months, researchers stayed on Henderson Island in 2015 and analyzed about 55,000 pieces of the garbage, according to Alex Bond, a conservation scientist who co-authored the PNAS report with Lavers. Based on identifiable markings on about 100 pieces, they determined that garbage had been carried there from China, Japan, South America, Europe, the United States and Russia.

"Plastic is a global problem," Bond told The Washington Post. "The pieces that we found on Henderson - none of it was from Henderson. . . . So to tackle it we need global cooperation."

Among the more shocking discoveries was an adult female green turtle that had become ensnared in some fishing line and died, he said. There also were crabs that had taken up residence in various plastic containers.

"We are not providing them a home. This is not a benefit to them," Lavers told the Guardian, of the crabs' makeshift plastic shelters. "This plastic is old, it's brittle, it's sharp, it's toxic. It was really quite tragic seeing these gorgeous crabs scuttling about, living in our waste."

Bond said the trash on Henderson Island is indicative of how much plastic debris there might be in the oceans.

"Henderson is just sort of an indicator of what's floating around out there," he said. "We talk about islands and marine life being a sort of canary in a coal mine for plastics but they've been the canaries for almost 20 years now and we're still not getting anywhere."

Plastic in the oceans can entangle marine mammals and fish, or be ingested by seabirds. It also never degrades, and can float around in the oceans for years or decades. He advises people to think about using plastic alternatives - "bamboo toothbrushes, canvas carrier bags, bringing a mug to Starbucks" - to cut down on plastic waste.

"When we dispose of plastics, we think it goes away, but there is no 'away,' " Bond said. As for the plastic on Henderson Island, it is fated to remain there indefinitely.

"Cleaning it up would be a Sisyphean task. It would never end," he added. "More than 3,500 new items arrive every day. Because Henderson is just so seldomly visited, a beach cleanup for lack of a better phrase is just not feasible."

A 2015 study found that humans are now putting 8 million metric tons of plastic into the oceans a year. Ocean current systems have also carried floating plastic to other far, formerly untouched corners of the planet: Last month, The Washington Post's Chris Mooney reported that parts of the Arctic Ocean have become a "dead end for floating plastics."

Promoted
Listen to the latest songs, only on JioSaavn.com
"It's only been about 60 years since we started using plastic industrially, and the usage and the production has been increasing ever since," Carlos Duarte, director of the Red Sea Research Center at the King Abdullah University of Science and Technology in Saudi Arabia, said. "So, most of the plastic that we have disposed in the ocean is still now in transit to the Arctic."