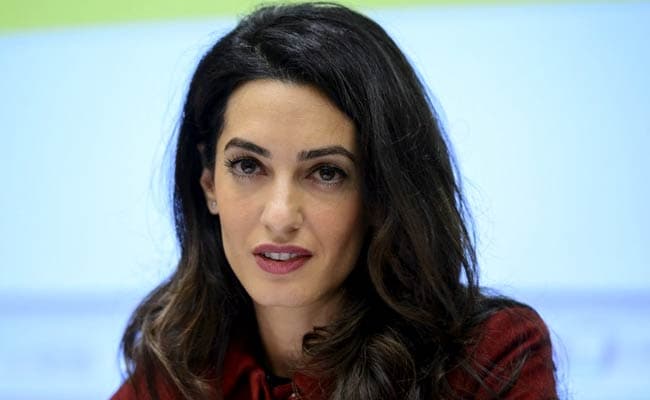 Amal Clooney is on a mission to prosecute Islamist group for their crimes against Yazidi community.

LONDON: ISIS terrorists who have enslaved, murdered and raped Yazidi women and children must be brought to justice, no matter the price, international human rights lawyer Amal Clooney said on Monday.

Clooney, a barrister at Doughty Street Chambers in London, is on a mission to prosecute the Islamist group through the International Criminal Court for their crimes against the Yazidi community.

She announced in June she would represent Yazidi women in Iraq who have been victims of sexual slavery, rape and genocide by ISIS, also known as ISIS.

"It's been harrowing to hear the testimony of girls as young as 11 and 12 talk about what's happened to them. And still we haven't been able to do anything about it," she said in an interview with U.S. television broadcaster NBC on Monday.

"They are brainwashing people and I think one of the ways to take action against that is to expose their brutality and their corruption and partly, you can do that through trials."

When asked if she would pursue this case "no matter the price" Clooney said she would, adding that she did not take the decision lightly.

"We did discuss it and we are aware of some of the risks involved, of course," she said, referring to a conversation with her husband, Hollywood actor George Clooney. "This is no joke. This is ISIS."

"I put my own life at risk"

ISIS have killed, raped and enslaved thousands of Yazidis since 2014, accusing them of being devil worshippers and forcing over 400,000 of the religious minority to flee their homes in northern Iraq.

According to the United Nations, the Sunni militants enslaved about 7,000 women and girls in 2014, mainly Yazidis whose faith blends elements of Christianity, Zoroastrianism and Islam, and is still holding 3,500, some as sex slaves.

The United States, the European Parliament and the Council of Europe have all described the Islamist militant group's actions as genocide.

Yazidi campaigners, including Nobel Peace Prize nominee Nadia Murad Basee Taha, have been pushing for international justice for the crimes committed against them by ISIS.

"I put my own life at risk, but I don't have a life without giving hope to other victims," said Taha, who appeared alongside Clooney on NBC.

Taha, who was appointed a UN goodwill ambassador for human trafficking victims on Friday, has urged the international community to do more to bring the jihadist terrorists to justice.

"Even today, I am not free. I cannot feel free while thousands of other girls like me are still captive," she said at her appointment ceremony in New York.

"My real fear is that once ISIS is defeated, ISIS will just shave off their beards and walk the streets of their cities as if nothing has happened. We cannot let this happen."

Taha said she was abducted by ISIS terrorists from her village in Iraq in August 2014, and taken to the ISIS stronghold of Mosul, where she and thousands of other Yazidi women and children were exchanged by militants as gifts.

She was tortured and repeatedly raped before she escaped three months later.

Promoted
Listen to the latest songs, only on JioSaavn.com
Clooney said two years on, there was no justice for Yazidi women and children.

"I'm ashamed as a woman that girls like Nadia can have their bodies sold and used as battlefields," said Clooney, addressing U.N. officials in New York on Friday. "I'm ashamed as a human being that we can ignore their cries for help."
© Thomson Reuters 2016