The US attorney in Brooklyn, said there was "insufficient evidence" that officer Daniel Pantaleo broke the law or contributed to the death of Eric Garner during an arrest on July 17, 2014. 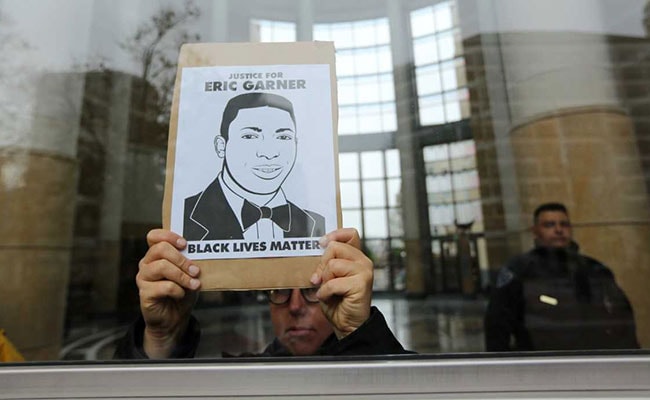 Eric Garner, can be heard saying "I can't breathe" 11 times before he dies.

A New York police officer accused of placing a 43-year-old black man in a banned choke hold just before his death in 2014 will not face federal charges, the government said, in a decision slammed by the victim's family as an "insult."

The move effectively closed the five-year-old case that fueled national "Black Lives Matter" protests calling for police to be held accountable for the deaths of unarmed African-Americans in custody or facing arrest.

Richard Donoghue, the US attorney in Brooklyn, said there was "insufficient evidence" that officer Daniel Pantaleo broke the law or contributed to the death of Eric Garner during an arrest on July 17, 2014.

The lawyer told reporters Pantaleo had not deliberately placed Garner in a choke hold although he effectively created one for seven seconds as both men struggled and fell.

Garner, who was being detained on suspicion of illegally selling cigarettes on a sidewalk, repeatedly said "I can't breathe" to officers holding him down and after Pantaleo pulled away from his neck.

He then appeared to lose consciousness, and the father-of-six was taken to a hospital where he was pronounced dead.

But Pantaleo was not engaged in the choke hold as Garner called out, Donoghue said, nor afterwards.

One medical examiner ruled that the death was a homicide, saying he suffered "compression of neck (chokehold), compression of chest and prone positioning during physical restraint by police."

But a second was unable to conclude that the accidental choke hold itself was the cause.

Experts said other factors that might have contributed to Garner's cardiac arrest included being held in a prone position, damage to his neck unattributable to the choke hold and underlying ailments.

Calling Garner's death "a terrible tragedy," Donoghue said that "having thoroughly investigated the surrounding circumstances, the department has concluded that the evidence would not support federal civil rights charges against any officer."

"This is an outrage, an insult to injury," said Garner's mother Gwen Carr outside the US attorney's office. "You won't get away with it. I stood by for five years. I'm not being quiet anymore."

The decision came one day before the statute of limitations ran out on the case -- and after years of pressure from Garner's mother and supporters for federal prosecution.

A New York state grand jury had decided in December 2014 that there was insufficient evidence to support homicide charges, amid claims that Garner suffered from a heart condition and asthma that could have caused his death.

"The DoJ has failed us," Carr said. "Five years ago, my son said 'I can't breathe' 11 times. Today we can't breathe. Because they have let us down."

The arrest of Garner by four officers was recorded by a bystander on a cellphone. The footage went viral and sparked an uproar.

It showed Pantaleo putting his arm tightly around the much larger suspect's neck and driving him down to the pavement before releasing him. Meanwhile another officer pressed Garner's head to the pavement, and he complained 11 times that he could not breathe.

Garner's family turned to the Justice Department to consider whether federal criminal or civil rights charges could be brought against one or more officers in the case.

New York Police Commissioner James P. O'Neill will ultimately decide whether to take disciplinary measures including firing Pantaleo, but he has been waiting for the verdict of a departmental trial for the officer that finished last month.

New York Democratic Senator Kirsten Gillibrand, who is also running for president, called the decision not to prosecutor "an outrage."

"Five years after Eric Garner was placed in a banned chokehold in clear violation of NYPD policy, and said 'I can't breathe' eleven times on video, his family still can't get justice," she said.