Nikki Haley to be sworn in amid heavy snow 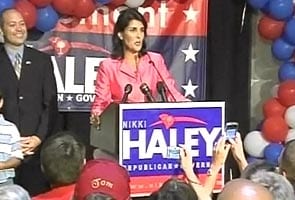 Washington: Indian American Namrata 'Nikki' Randhawa Haley, a daughter of Sikh immigrants from Punjab, is all set to be sworn in as the South Carolina Governor at a simple-but-impressive ceremony in Columbia, despite heavy snowfall and forecasts of deteriorating weather.

A State of Emergency has been declared in South Carolina as many as nine inches of snow has dropped in parts of the state and more that 2,000 car crashes were reported.

The inaugural ceremony, to be held Wednesday morning would be attended by several Congressmen.

It would be the first major function in the State after the weekend's assassination bid at Congresswoman Gabrielle Giffords, who is in a critical condition at an Arizona hospital.

Republican Bobby Jindal, the current Governor of Louisiana, is the first Indian American to occupy the position.

Local police authorities said the security at the inauguration event would be tighter than usual.

Hundreds of people from all over the State including a number of Indian Americans from various parts of the countryare scheduled to attend the inaugural to be held on the south side State House steps.

Local newspapers and television channels showed pictures of the inaugural venue wherein the chairs were covered with snow, as the region was hit by a massive snowfall.

Authorities were working round the clock to clear the venue of the snow.

"Tomorrow everything is going on as planned... The church service will start early in the morning," said Inaugural Committee Co-Chair Katon Dawson.

The inauguration begins with a prayer service at Trinity Episcopal Cathedral in Downtown Columbia in the morning, followed by the State House ceremony at 11 am (local time).

Thereafter, they have a First Family Open House at the Governor's Mansion. Finally, from 7:30 pm to 11 pm, an inaugural gala is scheduled.

When she enters the South Carolina Governor's mansion, the 38-year-old politician would replace Jindal to be the youngest current governor in the United States.