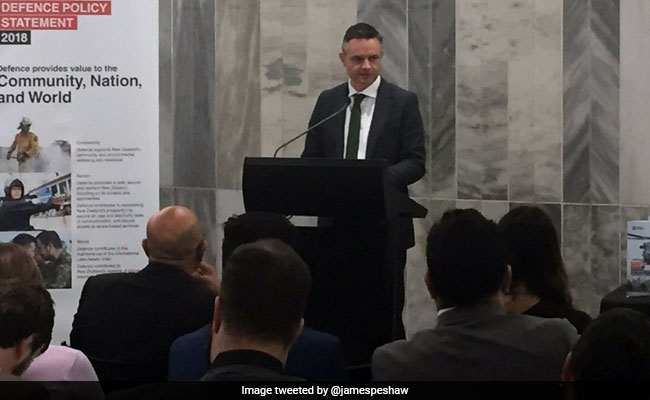 Military roles seem to be about fighting the aftermath of weather events, James Shaw said.

The New Zealand Defence Force identified climate change as one of its biggest security challenges today, warning that responding to global warming will increasingly stretch its resources.

The NZDF said the impact of climate change in the neighbouring Pacific islands promised to be so extreme that providing humanitarian assistance could limit its ability to perform its traditional defence roles.

"With the intensifying impacts of climate change... New Zealand may be faced with concurrent operational commitments, which could stretch resources and reduce readiness for other requirements," it said in a report examining climate's impact on the military.

The NZDF has already played a major part in helping Pacific island nations such as Vanuatu and Fiji following devastating cyclones blamed on man-made global warming.

The report said problems in the Pacific would only worsen, bringing the potential for food and water shortages, land disputes arising from climate migration and more violent storm disasters.

"When the effects of climate change intersect with a complex array of environmental and social issues, they can be a significant contributor to both low-level and more violent conflict," the report added.

"The security implications of climate change are further magnified in areas dealing with weak governance or corruption."

Climate Change Minister James Shaw said the military's role was changing."More and more, their battles seem to be about fighting the aftermath of extreme weather events, which fewer and fewer people these days are trying to argue are not part of the impact of climate change," Mr Shaw said.

New Zealand has lifted its presence in the Pacific this year, partly in response to China's growing role in the region, which Wellington sees as falling within its sphere of influence.

The NZDF report did not mention China directly but warned "some states could look to use assistance in climate change disaster adaptation... as a way to increase influence".

It said the NZDF's operations in the Pacific arising from climate change could enhance New Zealand's reputation in the region.

"Working with Pacific island countries on climate change, including in the security sphere, is an opportunity to learn lessons from each other while further strengthening strategic partnerships," report said.