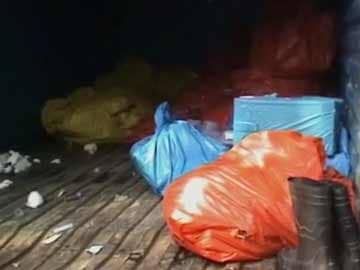 New York: Researchers have discovered a new type of rock created by melted plastic trash on a beach in Hawaii.

The new rock material dubbed plastiglomerate is the result of melted plastic trash on beaches mixing with sediment, basaltic lava fragments and organic debris, such as shells.

Plastic does not break down easily and is estimated to persist in the environment for hundreds to thousands of years.

At Hawaii's Kamilo Beach, Captain Charles Moore, an oceanographer with the Algalita Marine Research Institute in California, found that plastic, if melted, can actually become one with rocks, sediment and other geologic materials.

"He found some plastic had been melted to rocks, and other pieces of natural material had also been stuck on it," said study lead author Patricia Corcoran, a geologist at the University of Western Ontario (UWO) in Canada.

"He didn't know what to call it. It's possible other people have found [the plastic conglomerates] at other locations before Captain Moore did, but nobody had thought to report it or identify it," Corcoran said.

The researchers discovered there are two types of plastiglomerates at Kamilo Beach: In situ and clastic.

In situ plastiglomerate is more rare than the clastic variety, and forms when "plastic melts on rock and becomes incorporated into the rock outcrop," Corcoran told 'Live Science', adding that the melted plastic can also get into the rock vesicles, or cavities.

Clastic plastiglomerates are loose rocky structures, composed of a combination of basalt, coral, shells, woody debris and sand that have been glued together by melted
plastic.

When Moore discovered Kamilo Beach's plastiglomerates, he hypothesised that molten lava had melted the plastic to create the new rock.

However, the researchers found that lava had not flowed in that area since before plastics were first invented.

The researchers then concluded that people inadvertently created the plastiglomerates after burning plastic debris, either intentionally to try to destroy the plastic or accidentally by way of campfires.

The team believes the material could be present at a lot of other beaches around the world, particularly in areas where people camp or live.

Promoted
Listen to the latest songs, only on JioSaavn.com
"I would say that anywhere you have abundant plastic debris and humans, there will probably be plastiglomerates," Corcoran said.

The plastiglomerate is described in the journal GSA Today.