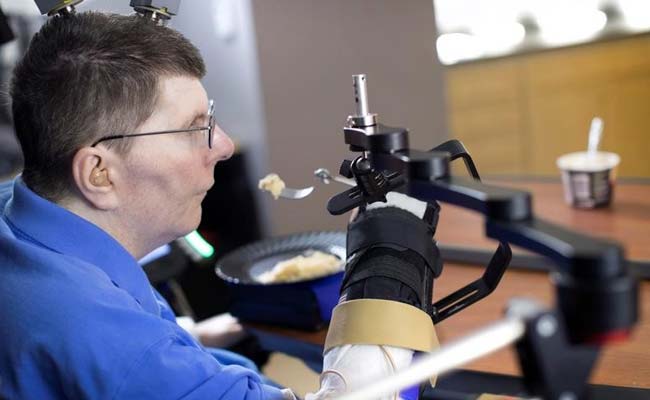 Bill Kochevar for the first time in in eight years moved his arm simply by thinking about it. (Reuters)

Bill Kochevar didn't feed himself for more than eight years, nor did he scratch his nose. He couldn't. A bicycle accident in 2006 left him nearly completely paralyzed from the shoulders down.

Now, as outlined in research published Tuesday in The Lancet, Kochevar regained usage of his right hand with the help of an experimental technology called a neuroprosthetic. It essentially created a new connection between the brain and limb to replace the one that was broken.

For the first time in eight years, the 56-year-old Cleveland resident moved his arm simply by thinking about it. He drank a cup of coffee, munched on a pretzel and fed himself mashed potatoes.

"It was amazing," Kochevar said in a video published by Case Western Reserve University. "I thought about moving my arm, and it did. I could move it in and out, up and down."

"We have been able to take the electrical signals which represent his thoughts and use that to control stimulation of his arm and hand," said the study's lead author Abidemi Bolu Ajiboye, assistant professor at Case Western Reserve University.

Though Kochevar was the first to benefit from such technology, Bolu Ajiboye said he believes it could be accessible to the general public in five to 10 years.

Kochevar was on a 150-mile bicycle ride one rainy day in 2006, when he crashed into the back of a mail truck that had stopped to deliver a package. He was left paralyzed from the shoulders down. Upon learning of the research in 2014, he volunteered to take part.

"Somebody has to do research," he said. "If nobody does research, things don't get done."

The inherent problem was that signals from Kochevar's brain were not reaching the rest of his body due this spinal cord injury.

The procedure to create an entirely new connection between his brain and arm took place in two distinct phases.

First, researchers implanted an electrode array, used to detect and record brain signals, into the motor cortex of his brain, the area responsible for arm and hand control.

The sciences hooked the array up to a computer interface displaying a virtual arm. Responding to Kochevar's neural signals, the virtual arm would move about the computer screen, approximating a real limb.

At first, Kochevar simply attempted to control the on-screen arm with his mind, as if it were his own.

"We have an algorithm that sort of transforms those neural signals into the movements he intended to make," Robert Kirsch, a professor of biomedical engineering at Case Western, told NPR.

"He was able to do it within a few minutes," Kirsch said in a statement. "The code was still in his brain."

After four months of training, he became adept at controlling the on-screen arm.

"It went very well very quickly," Kochevar told Time. "I learned how to do it right away and got better and better."

Researchers also implanted a network of 36 muscle-stimulating electrodes into his right arm and hand. These send electrical pulses into the muscles, which cause contractions and allow them to move, similar to how a pacemaker prompts the heart to beat at a natural rhythm.

Next, the electrodes in Kochevar's brain were attached to those in his muscles via a computer interface. The interface decoded his brain's neural signals into the electrical pulses required to move his arm.

Instead of attempting to control a virtual arm, he attempted to control his own.

At first, researchers would move his arm and ask him to imagine he was doing it, as the computer interface recorded his resulting neural signals.

Soon, though, he could move his arm by thought alone. He does still require a mobile arm support - a sling of sorts - to hold his atrophied arm against gravity, but he controls that, too, with his brain.

Suddenly, he could feed himself, raise a straw to his lips and scratch his nose - actions he hadn't been able to perform for eight years.

The technology is far from perfected. There is a slight delay between him willing his arm to perform an action and the action taking place, but it is minuscule.

"The computer samples brain activity 30,000 times a second and the muscle reacts within 20 milliseconds," Bolu Abijoye told Time. "The literature suggests that it's when the delay gets to 300 milliseconds that it's really noticeable."

Kochevar also can't actually feel what he's doing. Although he can still perform the actions with his eyes closed, he can't identify what is in his hand by touch.

"This won't replace caregivers," he said. "But, in the long term, people will be able, in a limited way, to do more for themselves."

Added Kochevar, "For somebody who's been injured eight years and couldn't move, being able to move just that little bit is awesome to me. It's better than I thought it would be."

(This story has not been edited by NDTV staff and is auto-generated from a syndicated feed.)
Comments
Bill KochevarMove Arm By ThinkingTechnology