China denies it. But families and survivors describe mass detention and forced indoctrination. Uali Islam and his two children, hold signs calling for the release of his wife Sayragul Sauytbay.

First-of-its-kind courtroom testimony here has corroborated allegations that the Chinese government has built a network of internment camps in western China where Muslim minorities are held without charge for "reeducation."

Sayragul Sauytbay, an ethnic Kazakh Chinese national, said she crossed from China's Xinjiang region to Kazakhstan without proper papers after being forced to work at a camp where 2,500 ethnic Kazakhs were being held for indoctrination.

"In China, they call it a political camp, but really it was a prison in the mountains," she told a court last month packed with Kazakh villagers, reporters and a few tight-lipped Chinese diplomats. 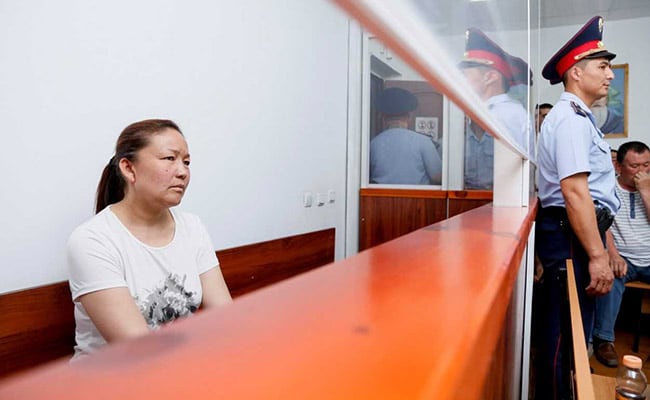 Interviews by The Washington Post with 20 other people in Kazakhstan familiar with the experiences of ethnic Kazakhs in China, including three former detainees and more than a dozen people who believe a family member is in detention, provided similar accounts of the camps, with additional details.

Taken together, their statements provide new evidence of extralegal detention and forced indoctrination in Xinjiang, revealing how the government, which has been predominantly targeting ethnic Uighur Muslims, is also detaining members of other, mostly Muslim groups, including Kazakhs.

People who have recently arrived here from China told of villages with checkpoints and countless security cameras and scanners, where those suspected of having foreign ties can be interrogated, held without charge and sent to "reeducation centers" indefinitely.

At these camps, Muslim minorities spend their days singing propaganda songs like "Without the Communist Party There Would Be No New China," and their nights in crowded cells, they said. One man released from a camp said he had been waterboarded.

In April, Laura Stone, acting U.S. deputy assistant secretary of state for China, said at a briefing in Beijing that "at least" tens of thousands of Chinese Muslims are in detention. Experts at a July 26 hearing in Washington held by the Congressional-Executive Commission on China - a body created by Congress in 2000 with a legislative mandate to monitor human rights and rule of law - suggested the number could be hundreds of thousands or more.

Heather Nauert, a State Department spokeswoman, in April criticized "the increasing levels of repression in Xinjiang." She said, "We are concerned about the widespread detentions and the unprecedented levels of surveillance."

Chinese officials have repeatedly dodged questions about the internment allegations. At a July 23 hearing at the court in Zharkent, a Chinese diplomat declined to answer questions about Sauytbay's case.

"I only want to emphasize that at the moment, the overall situation of Xinjiang society is stable, the momentum of its economic development is good and ethnic groups live in harmony," the statement read.

Sauytbay, who was in court on charges that she had entered Kazakhstan illegally, testified that she feared for her safety should she be deported back to China: "That I am discussing this camp in an open court means I am already revealing state secrets."

Sauytbay grew up in Xinjiang's far northwest, among ethnic Uighurs, Kyrgyz and some Han Chinese, according to her husband, Uali Islam. 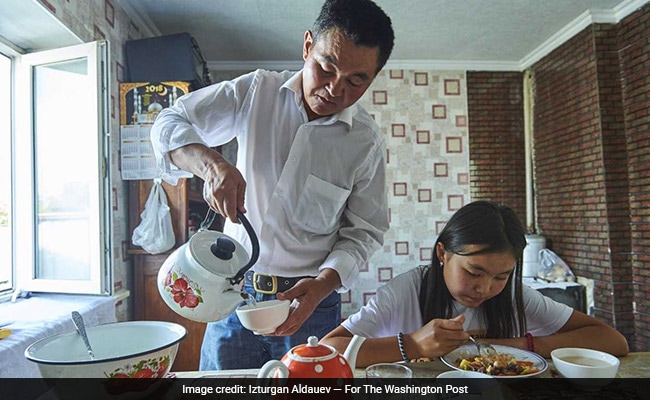 As children they were educated in Kazakh and Chinese, but in the last decade, a government-led shift toward Chinese-language education meant their children are not totally comfortable in Kazakh, Islam said. That bothered the couple.

The fraught relationship between the Communist Party and Muslim minorities took a sharp turn for the worse when violence shook Urumqi, the regional capital, in 2009.

After attacks by Uighurs in the years that followed, the government declared a "people's war" on terror, launching evermore stringent security measures.

"You cross from one road to another and they check you again," Islam said of their hometown.

Sauytbay, who had a government job in education, had her passport seized by local officials, her husband said. In recent years, some ethnic minorities in China have had their passports confiscated, or were prevented from getting new passports, according to a reportby Human Rights Watch and two interviewees.

In 2016, officials asked for the passports of Sauytbay's husband and children, and they decided it was time to leave for Kazakhstan. Sauytbay would follow.

"She said, 'I'm a woman and member of the Communist Party, they won't do anything to me. Maybe things will settle down and I can join you,' " Islam recalled.

In early 2017, she told him, she was informed that she was being transferred to what was described to her as an "education center." That spring, she arrived to see it was actually an internment camp housing thousands of Kazakhs.

Sauytbay told her husband the "education" was "all about the party." Guards locked everyone in a room, blasted propaganda from speakers and made them sing Communist Party songs.

Eventually, Sauytbay fled to Kazakhstan. "She said," he recalled, " 'I came here, I saw my children, now I can die.' " 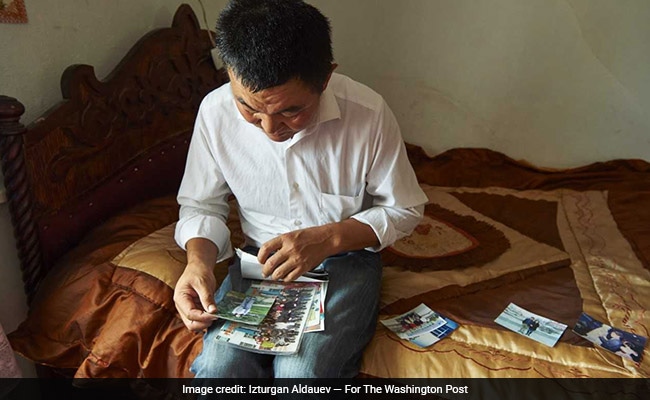 Uali Islam looks through family photos at his home. His wife said the internment camp where she was held housed thousands of Kazakhs.

A recent analysis by China Human Rights Defenders, an advocacy group, found that, according to government data, 21 percent of criminal arrests in China last year took place in Xinjiang - even though the population is just 1.5 percent of the country's total. Arrests jumped more than eightfold last year: from 27,404 in 2016 to an estimated 227,882 in 2017.

Those numbers do not include residents sent to the camps. Interviews here with separated families and former camp detainees indicate that detention without trial and mass internment are happening outside the penal system.

Kurmanjan Silam, 37, said her father, Madinam Silam, has been missing for months.

He was born in Xinjiang in 1948 and worked for the government for 40 years before becoming a resident of Kazakhstan, she said. This past spring, he was called back to his hometown to take care of some pension-related paperwork.

She has not heard from him since. Her mother told her over the phone that her father had been taken for education. "She told me not to call back, not to look for him," Kurmanjan Silam said.

Sapila Taqash said her 50-year-old son, Zheniskhan Baghdal, who works in entertainment, was taken from his home in Urumqi, in Xinjiang, more than a year ago. "They said they found something on his phone and took him away," she said.

She tried to find out when and how he was sentenced, only to conclude there was no charge or trial.

"If he had been tried, I would have gotten a paper saying he was tried," she said. "We don't know the sentence, don't even know if he is alive or not or how he's feeling. How has nobody seen him since?"

Akikat Kaliolla, 34, was born in Xinjiang, worked as a musician in Beijing and Shanghai, but then moved to Kazakhstan and married.

After several earlier visits, his parents and both his brothers came to Kazakhstan in June 2017 to celebrate his child's first birthday, he said.

Now, he said, they have disappeared back in China. Relatives there won't talk to him.

Amanzhan Seiituly was born in China but became a citizen of Kazakhstan, traveling back and forth between the countries for years.

He flew to Beijing in February for a business trip, but was stopped at the airport and interrogated about his connections in Kazakhstan.

"They were asking everything about what I do in Kazakhstan. 'How many relatives in China? What do they do? Do they have houses? What do the houses cost? Do you have a car? What did it cost?' "

After trying to escape, he was forced to fly to Xinjiang and was driven by police to his hometown, ostensibly to take care of paperwork, he said. He spent days at the local police station before being transferred, without trial, to a detention facility that officials called an "education center," he said.

His account was echoed by Orynbek Koxebek, who was released with him in March after spending months in various forms of detention.

Koxebek, who was born in China but is now a Kazakh citizen, said he returned to Xinjiang to see his parents and was called in by local authorities in November 2017 to discuss his citizenship paperwork.

He was interrogated, then sent for "reeducation" - in his case, literacy classes because he could not read or write Chinese.

Koxebek said, as well, that he was waterboarded. His was not the first allegation of torture in the camps: Another detainee previously interviewed by The Washington Post, Kayrat Samarkand, said he had been strapped for hours to a device called the "tiger chair."

The guards also taunted them, Koxebek said. "They told me, 'If you don't learn Chinese you will be in prison for five years,' " he recalled. "I didn't think I would ever be released."

When he was, officials told him not to talk about what happened - and for months, he did not.

But over time he began to realize, he said, "Somebody has to speak out."

The detention of its citizens in China has forced Kazakhstan's government to "walk a tightrope" between the demands of its people and the dictates of one of its most important trading partners, said Maya Wang, a Hong Kong-based China senior researcher at Human Rights Watch.

In May, Kazakhstan's Ministry of Foreign Affairs said it had raised the subject with the Chinese side and called for the the release of Kazakhs with dual citizenship.

"They've done this on the Internet and out in public, openly and secretly, inventing unfounded accusations with the evil intent of staining Xinjiang's image, grossly interfering in China's internal affairs and baselessly criticizing the Chinese government."

On Aug. 1, after weeks of campaigning by activists, Sauytbay was released from custody and spared immediate deportation. Judge Dinara Quiqabaeva suspended Sauytbay's six-month sentence because of the "exceptional circumstances" of her case.

Outside the courthouse, Sauytbay was mobbed by supporters shouting, "Long live Kazakhstan!"

But her fight is not over. Beijing could still press for extradition, lawyers said.

(Except for the headline, this story has not been edited by NDTV staff and is published from a syndicated feed.)
Comments
China Reeducation CampsMuslims In China