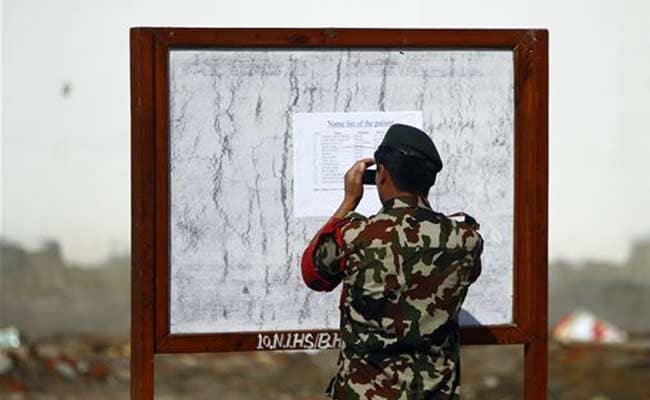 A Nepalese army soldier takes a photo of a patient's list at the Army Hospital. (Associated Press)

Kathmandu: Survivors of deadly blizzards that swept through the Himalayas this week said they were caught off-guard when the weather changed quickly along high-altitude trekking routes in northern Nepal.

At least 29 people were killed in a series of snowstorms and avalanches that struck at the height of the October trekking season. While more than 200 people have been rescued, sometimes plucked from mountainsides by helicopters, dozens more are still taking shelter in isolated mountain huts.

The dead and injured include foreign travelers as well as Nepalese guides and local villagers caught in the storms.

The skies were clear at the start of the week, said Gombu Sherpa, who was guiding a group of Germans near the Annapurna trekking circuit. But that changed suddenly when the snows blew in.

"We could hardly see anyone, even within a couple of feet. The wind was blowing snow and visibility was almost zero," he said in a telephone interview as he returned to Katmandu by bus. He said many people lost their way in the storm, but everyone in his group survived.

One of his assistants, who was behind the group when the storm hit, was missing for an entire night, lost in the blizzard.

"We found him the next morning wandering in the snow. It is a miracle that he is alive," he said.

Samten Sherpa of the guiding company Snow Leopard Trek said dozens of foreign trekkers were stranded at Tilicho lake, a picturesque hiking spot at 5,000 metres (16,400 feet). No one has been able to contact them for two days, and only two small lodges are at the lake, he said.

Most of the affected people were on or near the popular Annapurna circuit, a 220-kilometre (140-mile) trail through the Annapurna mountain range. Mount Annapurna is the 10th highest mountain in the world.

Rescue helicopters expanded their search area on Friday as the weather improved, looking for people who took shelter in small lodges and huts along trails where deep snow made walking extremely difficult, said Baburam Bhandari, the top government official of the Mustang district.

Helicopters rescued 40 trekkers on Friday, and received information about another 50 people stranded but safe in another village, he said.

Authorities rescued 78 trekkers from Mustang and 157 from the neighbouring Manang district on Wednesday and Thursday, he said.


Information Minister Minendra Risal said a new high-level government committee had been formed on the orders of the prime minister to monitor the rescue operation. The committee will coordinate the army, police, local administrations and private operators now involved in the rescues.

Nepal's government was criticised for not helping enough in the aftermath of the storms. Its initial assistance was limited to two army helicopters.

Promoted
Listen to the latest songs, only on JioSaavn.com
The blizzard, the tail end of a cyclone that hit the Indian coast a few days earlier, appeared to contribute to an avalanche that killed at least eight people in Phu village in Manang district. The dead included three Indian and four Canadian trekkers as well as three villagers, said government official Devendra Lamichane. Three Canadian trekkers who survived the avalanche were taken by helicopter to a shelter in a nearby town.

Five climbers were killed in a separate avalanche about 75 kilometres (45 miles) to the west, at the base camp for Mount Dhaulagiri. The climbers, two Slovaks and three Nepali guides, were preparing to scale the 8,167-meter (26,800-foot) peak, the world's seventh tallest, said Gyanedra Shrestha of Nepal's mountaineering department.