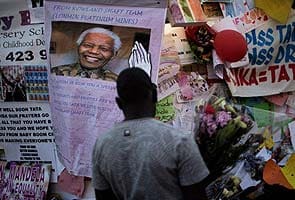 Johannesburg: Nelson Mandela was responding to treatment but still in a critical condition, South African President Jacob Zuma said on Wednesday after visiting the global peace icon in hospital.

"We are encouraged that Madiba is responding to treatment," said Zuma, referring to the anti-apartheid hero by his clan name. Zuma added the 94-year-old was "still critical but stable" after more than one month of intensive hospital treatment.

He urged the public to continue "showering him with love which gives him and the family strength."

South Africa's first black president was rushed to a Pretoria hospital on June 8 over a recurring lung infection. The king of his Thembu tribe told AFP on Wednesday that Mandela was "conscious".

Promoted
Listen to the latest songs, only on JioSaavn.com
"He could not talk, but he recognised me and made a few gestures of acknowledgement, like moving his eyes," said King Buyelekhaya Dalindyebo, who is also a nephew of the former statesman.

Doctors are said to have ruled out turning off his life support machines unless there is serious organ failure.