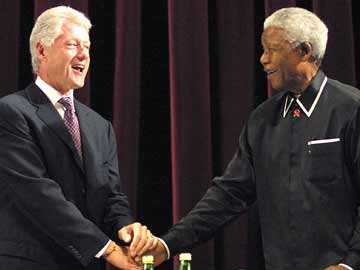 New York: Former US president Bill Clinton, who was in office when Nelson Mandela took power in South Africa, on Thursday mourned the death of a "champion for human dignity and freedom".

"Today the world has lost one of its most important leaders and one of its finest human beings," Clinton said in a statement.

"History will remember Nelson Mandela as a champion for human dignity and freedom, for peace and reconciliation," he added.

The Clinton and Mandela families became close, with the former US president visiting Mandela on the eve of his 94th birthday.

"Hillary, Chelsea and I have lost a true friend," Clinton said.

"All of us are living in a better world because of the life that Madiba lived. He proved that there is freedom in forgiving, that a big heart is better than a closed mind, and that life's real victories must be shared."

Clinton extended his thoughts and prayers to Mandela's widow Graca, his family and the people of South Africa.

"We will remember him as a man of uncommon grace and compassion, for whom abandoning bitterness and embracing adversaries was not just a political strategy but a way of life."