The accident happened early Monday on the main coastal highway used by many tour bus companies and linking the capital Lima with Arequipa in the south. 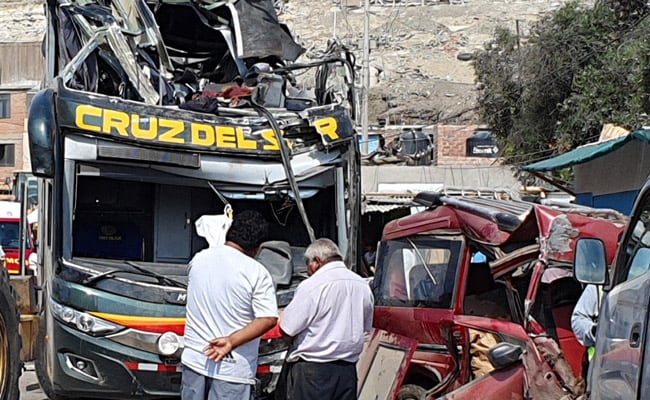 At least 16 people including two Germans were killed and 40 others injured after a bus crashed into parked cars in the south of Peru, authorities confirmed.

The accident happened early Monday on the main coastal highway used by many tour bus companies and linking the capital Lima with Arequipa in the south.

In a statement late Monday the prosecutor's office said there were two German citizens, 10 Peruvians, and four unidentified people among the 16 killed.

Among the injured were two Brazilians, two Americans and one Spaniard, according to the health ministry.

The crash occurred in the early hours of Monday when the bus left its lane and crashed into eight vehicles parked on the side of the road, at kilometer 571 of the South Pan-American route, in the Arequipa region.

Police and firefighters took the injured to hospitals in Arequipa and Nazca, cities that attract large numbers of tourists.

The bus had left Lima and was heading to Arequipa, a journey of around 16 hours.

Deadly traffic accidents are frequent in Peru, particularly during the rainy season at this time of year, but also due to poor road surfaces, insufficient signage and a lack of control by authorities.

In 2019, 1,123 people died in traffic accidents in Peru, the interior ministry said.