"Nationalism Betrayal Of Patriotism": Emmanuel Macron, Trump By His Side

Speaking in French, Emmanuel Macron emphasized that a global order based on liberal values is worth defending against those who have sought to disrupt that system 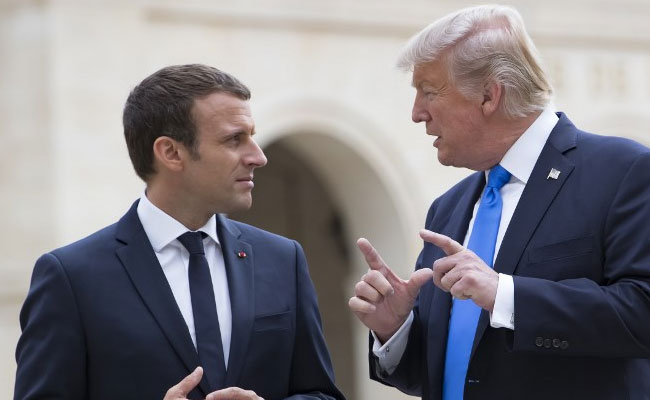 In the shadow of a grand war memorial here, French President Emmanuel Macron marked the 100th anniversary of the end of World War I by delivering a forceful rebuke against rising nationalism, calling it a "betrayal of patriotism" and warning against "old demons coming back to wreak chaos and death."

His words during a solemn Armistice Day ceremony under overcast skies at the foot of the Arc de Triomphe in the heart of the French capital were intended for a global audience. But they also represented a pointed rebuke to President Donald Trump, Russian President Vladimir Putin and others among the more than 60 world leaders in attendance.

Speaking in French, Macron emphasized that a global order based on liberal values is worth defending against those who have sought to disrupt that system.

The millions of soldiers who died in the Great War fought to defend the "universal values" of France, he said, and to reject the "selfishness of nations only looking after their own interests. Because patriotism is exactly the opposite of nationalism."

Macron has attempted to stand as a vocal counterweight to Trump, who recently called himself a "nationalist" and has moved to set the United States apart from global treaties, including the Iran nuclear deal, the Paris climate accord ad a U.N. program for refugees.

Amid growing divisions in Europe that have strained the European Union, Macron defended that institution and the United Nations, declaring that the "spirit of cooperation" has "defended the common good of the world."

"By putting our own interests first, with no regard to others, we erase the very thing that a nation holds dearest, and the thing that keeps it alive: its moral values," Macron said.

He denounced fringe ideologies that have become more mainstream, warping religious beliefs and setting loose extremist forces on a "sinister course once again that could undermine the legacy of peace we thought we had forever sealed."

The powerful remarks came as the world leaders gathered here have sought to mark the 100 years since the war by honoring those who served and died.

British Prime Minister Theresa May did not attend, remaining in London to preside over a war remembrance there, though she had visited France last week to lay wreaths at military cemeteries and meet with Macron. Chinese President Xi Jinping also was not present.

Putin told Russia's RT network after the ceremony that he and Trump spoke during a leaders' luncheon, but a formal meeting would wait until they cross paths at the G-20 Summit in Buenos Aries later this month. Putin said the two leaders agreed to a request from French officials not to overshadow the war remembrance ceremony.

"We are ready for dialogue," said Putin, adding a dig at the Trump administration for announcing the United States would exit a landmark Cold War arms treaty. "We're not the ones exiting the Intermediate-Range Nuclear Forces Treaty."

Ahead of the ceremony, dozens of world leaders dressed in black strode shoulder-to-shoulder along the Champs Elysees toward the Arc. Military jets streaked overhead, emitting red, white and blue smoke, the colors of France.

Trump and Putin did not participate in the processions. The group, which had first gathered at the Elysee Palace, had come to the Arc on tour buses along the 230-foot wide boulevard. Bells at Notre Dame cathedral tolled at 11 a.m., marking the signing of the armistice of a war in which 10 million military troops perished.

Trump and Putin took their own motorcades to the event and made separate entrances a few minutes after the main group. A White House spokeswoman said Trump arrived separately due to "security protocols," though she did not elaborate.

Trump and Putin shook hands with leaders, assembled on risers at the foot of the monument, and took their own positions. Trump and first lady Melania Trump took spots next to Merkel, while Putin stood next to Macron.

The ceremony could begin.

To the sound of a military brass band, Macron inspected French troops standing at attention and a choir sang the national anthem. Cellist Yo-Yo Ma performed a solo piece.

For Trump, dressed in a dark blue suit and red tie, the ceremony marked the beginning of a day in which he also attended in a luncheon with the world leaders and then delivered a speech at the Suresnes American Cemetery and Memorial - a day after he skipped a visit to a different cemetery.

At Suresnes, Trump ditched an umbrella and spoke in the rain for 10 minutes, at one point joking that the crowd was "getting drenched."

"It is our duty to preserve the civilization they defended," Trump said of the 1,541 buried there. "We renew our sacred obligation to memorialize our fallen heroes."

He did not address Macron's speech.

The relationship between Trump and Macron has soured as the U.S. president has promoted an "America First" foreign policy that has unsettled allies on trade and defense. Macron has sought to counter some of Trump's agenda and he has organized a three-day Peace Forum that began Sunday afternoon, just as Trump headed home to Washington on Air Force One.

For European observers, the commemoration was a somber event - and not exclusively because of the dead it honored.

In a climate of resurgent nationalism - which has seen upheavals in Rome, Budapest, Warsaw and even London - Macron was alone on the dais, preaching the virtues of multilateralism. Merkel, his most loyal partner in this endeavor, has announced she will soon leave public life.

"Franco-German reconciliation was at the very heart of what we've been seeing together," said Dominique Moisi, a French foreign policy expert at the Paris-based Institute Montaigne and an informal adviser to the Macron campaign.

"But she's out," he said of Merkel, who announced she will step down in 2021. "The spirit in which we are commemorating the events is no longer fully present."

Macron's speech was full of literary allusions, including to the French poets Guillaume Apollinaire and Charles Peguy, both of whom served in World War I. (Peguy was killed in combat in 1914.)

Sunday's address also contained a number of historic rebukes. He made a subtle reference to a well-known 1927 French book that decried the elites at the time, who embraced reactionary, nationalistic ideologies at the expense of a rational consensus.

Taking the stage to applause at the Paris Peace Forum later Sunday, Macron avoided presenting the weekend's event as a success. Instead, he said history would remember the image of multiple world leaders whose countries were once at war gathered in peace under the Arc.

The question, Macron said, was how that image would be interpreted.

"Will it be the symbol of a durable peace among nations?" he asked. "Or, on the contrary, a photograph of a final moment of unity before the world descends into a new disorder?"

The Washington Post's Anton Troianovski in Moscow contributed to this report.