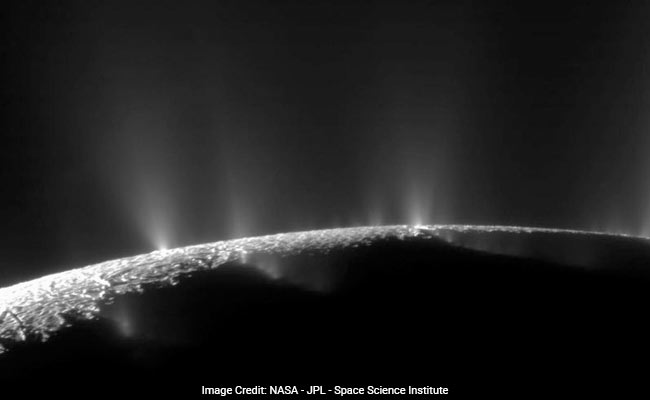 The geysers of Saturn's moon Enceladus are gushing up food for life, scientists say.

Researchers report Thursday in the journal Science that the jets of ice and gas gushing from the moon's south pole contain molecular hydrogen, a chemical characteristic of hydrothermal activity. On Earth, hydrogen provides fuel for communities of organisms that live around vents on the seafloor. Its presence on Saturn's icy moon suggests that this alien world, which harbors a saltwater ocean encased in a frozen crust, has the right conditions to give rise to microbial life.

"For a microbiologist thinking about energy for microbes, hydrogen is like the gold coin of energy currency," said Peter Girguis, a deep sea biologist at Harvard University who was not involved in the research. "If you had to have one thing, one chemical compound, coming out of a vent that would lead you to think there's energy to support microbial life, hydrogen is at the top of that list."

"It makes the Enceladus ocean seem a heck of a lot more habitable than we were thinking yesterday," agreed Ariel Anbar, an astrobiologist at Arizona State University. "And wouldn't we like to know, is there life living there?"

Everything scientists know about biology on Earth suggests that life is irrepressible. It thrives in clouds, in caves, in lakes of meltwater buried half a mile beneath the ice sheets of Antarctica, in boiling water plumes that gush from the ocean's deepest, darkest depths. Almost no environment is too extreme, as long as water, organic molecules and a bit of energy are available for organisms to exploit. This graphic illustrates how scientists on NASA's Cassini mission think water interacts with rock at the bottom of the ocean of Saturn's icy moon Enceladus, producing hydrogen gas.

Enceladus (pronounced "en-SELL-a-dis") provides all three. It's looking more and more like the most habitable spot in our solar system beyond Earth, and scientists' best target yet in the search for alien organisms.

And it might not be alone. Images from the Hubble Space Telescope suggest that plumes much like those on Enceladus are also spewing from Jupiter's moon Europa, NASA announced Thursday.

Like Enceladus, Europa harbors a subsurface saltwater ocean and could contain organic molecules. NASA hopes that Europa's geysers are likewise connected to the moon's watery interior. In the coming decade, the space agency will send a probe called the Europa Clipper to seek signs of life on Jupiter's moon by flying through those plumes.

"In the NASA strategy for searching for life, the key ingredients have always been water, building blocks like carbon, oxygen, nitrogen . . . and a source of energy," said Mary Voytek, a senior scientist for astrobiology at NASA who was not involved in the research. Knowing that two worlds in the solar system might meet these requirements, "it's very possible that we have life out on one of those moons," Voytek said.

Enceladus' geysers have made it a target in the search for extraterrestrial organisms ever since the NASA space probe Cassini detected them in 2005. The plumes are rich with water and organic molecules, and the force with which they gush from the surface suggests that they are driven by a hydrothermal system two-and-a-half times more powerful than the one that powers Yellowstone's geysers and bubbling hot springs. They are also physical evidence of the water in the moon's interior, which is heated by the gravitational pull of Saturn.

In October 2015, Cassini flew deeper into the geysers than it ever had before, skimming a mere 30 miles above the moon's surface. The probe trapped particles from the plume inside its Ion Neutral Mass Spectrometer - a "sniffing" instrument that sorts material into its component parts based on mass - and analyzed the icy spray.

The results suggest that the geysers contain a surprising ratio of molecular hydrogen, carbon dioxide and methane. The molecules are in "thermodynamic disequilibrium," the researchers say; that is, they're chemically out of whack. Molecular hydrogen (a compound made of two hydrogen atoms) is a very volatile gas, and is not easily trapped on a small, icy world like Enceladus. Its presence in the geyser plume indicates that there are processes beneath the surface constantly replenishing the supply of molecular hydrogen.

The paper's authors examined a number of possible reasons for this chemical imbalance in their paper. The most likely explanation, they conclude, is something called serpenitinization. As hot water from Enceladus' ocean flows through cracks in the seafloor, it reacts with the iron-rich rock to form molecular hydrogen. As Enceladus orbits Saturn, it leaves a trail of particles from its geysers in its wake, forming Saturn's  "E ring."

This exact phenomenon is known to happen around Earth's hydrothermal vents, where it fuels entire ecosystems of chemosynthetic organisms. Instead of deriving energy from the light of the sun, as photosynthetic plants do, these creatures feed on chemical imbalances. They power themselves by getting hydrogen to react with carbon dioxide to form methane, a process called methanogenesis, just as a lightbulb is powered by electric charges moving across a circuit.

Methanogenesis is one of the oldest metabolic processes on the planet. It predates photosynthesis; it may even have powered Earth's very first life. The fact that Enceladus produces the same chemical imbalances that drive chemosynthetic life on Earth is intriguing.

"But it's not necessarily an indication for or against life" on Saturn's moon, cautioned co-author Hunter Waite of the Southwest Research Institute in Texas (SWRI).

Waite compared the surplus of molecular hydrogen on Enceladus to a stack of pizzas piled up outside a house. On the one hand, if there was anyone living in the house, you would think that the inhabitants would be eating it. The fact that the hydrogen persists could be evidence that there are no microbes around to use it for fuel. On the other hand, maybe there's so much pizza arriving every day that the residents can't keep up. There may be other factors limiting how much hydrogen the hypothetical microbes can process, allowing some molecules to escape up to the surface.

If there is life on Enceladus, the scientists know how much energy is available for it to consume based on the ratio of hydrogen in the plume. Co-author Christopher Glein, a geochemist at SWRI, called it "the first assessment of the calorie count in an alien ocean." He and his colleagues found that the moon's hydrothermal activity supplies more than enough energy to power a chemosynthetic ecosystem - the equivalent of 300 pizzas per hour.

Clearly, Enceladus's sea floor is a veritable hydrogen pizza party. But is anyone eating?

"We're going to have to go back with new missions and more focused instrumentation to answer that question," Waite said.

Cassini won't have any more opportunities to sample the geyser plumes. After orbiting Saturn for more than a decade, the spacecraft is scheduled to start a series of dives between the planet and its rings next week. In September, Cassini will plunge straight into Saturn, burning up almost as soon as it hits the gas giant's atmosphere. The command sequence for this final mission was transmitted to the probe by NASA's Deep Space Network on Tuesday.

It's Enceladus' fault that Cassini must die - NASA doesn't want to risk the spacecraft inadvertently contaminating the potentially habitable moon, so they cannot leave it hanging out in space after it runs out of fuel.

Yet the space probe has already dramatically exceeded scientists' expectations. When Cassini launched toward Saturn in 1997, NASA didn't even know that Enceladus had geysers, let alone an ocean that could harbor life, and the spacecraft wasn't equipped with instruments that could test for biomarkers (the instrument used in this study was initially designed to study a different moon entirely). If scientists want to search for life on Enceladus in earnest, they will need to send another probe to the moon.

Glein is working on a proposal for exactly such a mission. But right now, NASA has no project in the works to revisit the Saturnian system. It could be more than a decade before we go back.

"It's frustrating and thrilling at the same time," Glein said.

Fortunately, Enceladus no longer appears to be the only ocean world spitting its contents into space. The news that Europa also has geysers comes just as NASA begins the preliminary design phase of the Europa Clipper mission, which is slated to orbit Jupiter and perform 45 flybys of the planet's icy moon.

This is not the first time scientists have detected evidence of geysers on Europa; Hubble has spotted similar plumes several times before. But this detection provides further evidence for the activity, and will help scientists figure out the timing of Europa's geysers in advance of the Clipper mission.

The plumes were detected by the Hubble Space Telescope as Europa passed in front of Jupiter. Silhouetted against the hot, glowing form of its host planet, scientists could see gusts of material shooting upward. The jets were so powerful that they extended 50 kilometers above the moon's surface - Old Faithful, the famous geyser at Yellowstone, only reaches 184 feet.

When the Clipper arrives in the mid-2020s, it will carry instruments specifically designed to sample Europa's plumes and test for organic molecules. Unlike Cassini, which had no idea what it would encounter when it detected Enceladus's geysers for the first time, the spacecraft should be well-equipped to detect life - if there's any life to be found.

Voytek said that her boss, NASA's planetary science director Jim Green, is determined to find organisms beyond Earth before he retires. "You've got a couple of years," he told her, jokingly, when they heard about the Enceladus discovery.

Green is optimistic about his chances.

Promoted
Listen to the latest songs, only on JioSaavn.com
"We're just on the precipice of moving this whole activity forward," he told The Washington Post. "I think in our lifetime we'll be able to answer the question, 'Are we alone?' "