NASA's Cassini mission is currently executing a series of daring Saturn's ring-grazing dives as the mission comes closer to the culmination of its epic 20-year-long journey in space. 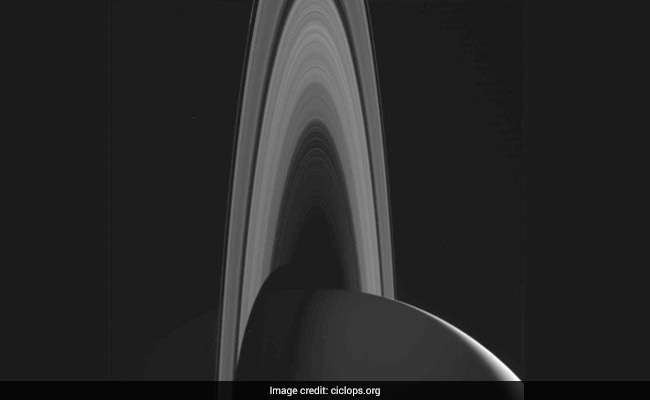 Washington: NASA's Cassini spacecraft has beamed back a stunning image that shows a sliver of Saturn's sunlit atmosphere with its icy rings stretched across the foreground as a dark band.

The Cassini mission is currently executing a series of daring ring-grazing dives as the mission comes closer to the culmination of its epic 20-year-long journey in space.

The new image captures the unilluminated side of the rings from about seven degrees below the ring plane.

.@CassiniSaturn craft saw this sliver of Saturn's sunlit atmosphere as the icy rings stretch across the foreground: https://t.co/VY7JhYznhjpic.twitter.com/CMcjx1bgGI

The image was taken in green light with the Cassini spacecraft wide-angle camera on March 31.

The view was obtained at a distance of about one million kilometers from Saturn.

After executing 22 dives between the planet's icy rings, the spacecraft will plunge into Saturn's atmosphere.

The finale orbits bring the spacecraft closer to Saturn than ever before, providing stunning, high-resolution images and new insights into the planet's interior structure and the origins of the rings, NASA said.

During its final plunge into Saturn, Cassini will send data about the atmosphere's composition until its signal is lost.

(This story has not been edited by NDTV staff and is auto-generated from a syndicated feed.)
Comments
Cassini missionNASA