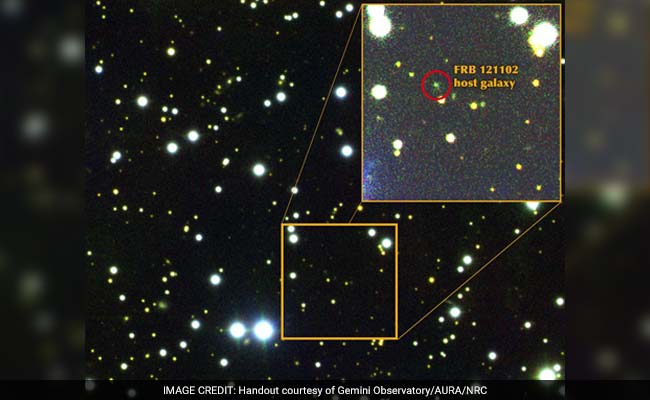 FRB 121102 host galaxy. The dwarf galaxy from which fast radio bursts originate is a green dot

For the first time, scientists have nailed down a source of fast radio bursts, one of astronomy's most enigmatic phenomena.

A dim dwarf galaxy 2.5 billion light years from Earth is sending out the mysterious millisecond-long blasts of radio waves, researchers report Wednesday in Nature and Astrophysical Journal Letters. The bursts traverse vast expanses of time and intergalactic space before reaching our planet.

FRBs are extremely brief pulses of radio waves, flaring with the power of about 500 million suns. Scientists have recorded just 18 of these signals, but studies suggest there could be as many as 10,000 a day. Their unpredictability makes them difficult to spot, and they appear to come from all over the sky.

Understanding these bursts may open up a new field in astronomy, added Lorimer, who was not involved in the new reports. Because they travel so far to reach Earth, FRBs could be a tool for studying the mostly empty space between galaxies and mapping the distribution of matter across the universe. But first astronomers have to figure out what exactly they are.

"I am not exaggerating when I say there are more models for what FRBs could be than there are FRBs," said Cornell astronomer Shami Chatterjee, the lead author of the new Nature paper.

Many scientists think the bursts are emitted by distant neutron stars, the super-dense embers of exploded suns. But some believe they must originate in our own galaxy. Still more suggest that FRBs could be caused by cataclysms like a supernova or a collision of two stars. This last theory was compelling because most FRB detections were one-off events - astronomers never spotted more than one flare from a single source.

In spring, researchers looking at archival data from Arecibo Observatory - one of the largest radio telescopes in the world - found evidence that bursts were repeatedly coming from the same spot in the sky. Each one carried the telltale signature of an FRB: the high frequency radio waves arrived first, followed by successively lower frequencies, which get stretched out and slowed down as they travel across space. The signal, called FRB 121102, was definitely repeating, and it certainly traveled a long way to reach Earth.

But where did it come from? To answer that question, Chatterjee and his colleagues turned to the Karl G. Jansky Very Large Array, a network of 27 radio telescopes spread over a 20-mile-wide area in the high grassland of New Mexico (Jodie Foster works there in the movie "Contact"). Each of the telescopes making up the VLA has a smaller diameter than the one at Arecibo, meaning they don't take in very much of the sky. But combining the data from all 27 gives a very high-resolution glimpse of one small swatch of space - exactly what Chatterjee needed.

He applied for 10 hours of telescope time, thinking that would be plenty to catch FRB 121102 flaring. But he saw nothing. He applied for 40 more hours. Nothing again.

Finally, he asked for 40 more hours at the VLA, scheduled to coincide with 40 hours of time at Arecibo. During a trial run, the team caught its first flash from FRB 121102. Then it got eight more.

"Nine pulses captured with two telescopes - now we have enormous resolution," Chatterjee said. "We've pinpointed a speck, to a 10th of an arcsecond [a unit of angular measurement] . . . where the burst is coming from."

Next, scientists at the Gemini Observatory in Hawaii trained their optical telescope on the speck nailed down by Chatterjee. Their scan of the sky revealed that FRB 121102's source is 2.5 billion light years away, within a very faint dwarf galaxy with about 1 percent of the mass of the Milky Way.

The discovery allows researchers to rule out some proposed explanations for FRBs. They can't be cataclysmic, since their source needs to survive whatever causes them in order to repeat, and they definitely don't originate within our galaxy.

Observations from the European VLBI network - an array of telescopes spread all over the globe - offered an even more precise snapshot of the FRBs' origin point, which seems to coincide with another, more persistent source of radio waves. Those signals resemble the radio emissions that come from supermassive black holes. But those types of black holes are typically found only in bright galaxies - not small faint ones like that identified by the astronomers at Gemini.

Chatterjee said he's inclined to believe FRBs are pulses emitted by magnetars - neutron stars with an especially strong magnetic field. These stars are already known to emit high-energy radiation, like gamma rays and X-rays. It would be unusual for a magnetar to flare as brightly as an FRB suggests it must. But Chatterjee said that blobs of plasma surrounding the star could act as a lens, coalescing in just the right manner to focus the light toward Earth.

"It's not a slam-dunk explanation," Chatterjee said, noting that scientists usually are drawn to the simplest possible interpretations of their results. But for now, he thinks it's the most compelling theory.

It remains to be seen whether FRB 121102 - the only one that is known to repeat - is representative of all other fast radio bursts. Astronomers wonder whether there are two classes of FRB, some that repeat and some that come from cataclysms that can only happen once.

All this uncertainty has hobbled previous attempts to identify a source of FRBs. One researcher at Australia's Parkes Radio Telescope spent months trying to track down what she thought were strange signals related to FRBs - only to discover they were actually blasts from the microwave oven in the lab kitchen.

In February, an international team of astronomers announced in Nature that they'd traced one of the flashes back to a galaxy 6 billion light years from Earth based on an "afterglow" they saw emanating from the host galaxy. But that identification quickly fell apart when other researchers observed that the glow persisted long after the bursts came and went; two months later they reported that the purported burst was actually a flickering black hole. During those same two months, the researchers looking at Arecibo data announced that FRB 121102 was repeating - a discovery that shifted the field of FRB research under astronomers' feet.

Heino Falcke, an astronomer at Radboud University-Nijmegen in the Netherlands, invoked past missteps in his analysis of the new study for Nature: "As good detectives, we should avoid adopting newly emerging dogmas too soon, even when we think we have caught the suspect red-handed," he wrote. "FRBs are nimble fugitives and are not necessarily all alike."

Lorimer suggested that clarity might come from adopting Chatterjee's "sit and stare method" - taking a telescope, pointing it at a known FRB source, and waiting to detect another pulse. This is no simple task; there are a limited number of radio telescopes in the world and an inexhaustible list of possible uses for them. On top of that, two of the U.S.'s top radio telescopes, Arecibo and the Green Bank Observatory in West Virginia, are facing funding woes and could be shut down. But new instruments are about to come online, including China's Tianyan ("eye of heaven") telescope, whose 500-meter dish makes it the largest in the world.

But if astronomers can figure out where FRBs come from and why, they may start to use the signals to probe other mysteries.

"This phenomenon is so well-tuned to explore the universe," said Sarah Burke-Spolaor, an astronomer at West Virginia University and co-author of the new study. Their dispersion - the fact that high-frequency wavelengths arrive slightly before lower frequencies - can inform astronomers about the matter they encountered during their journey to Earth. The signals might even provide ways of testing Einstein's theory of relativity, because they cross so much of the universe over such long spans of cosmological time.

Promoted
Listen to the latest songs, only on JioSaavn.com
"This detection has really broken open the gates of a new realm of science and discovery," Burke-Spolaor said.