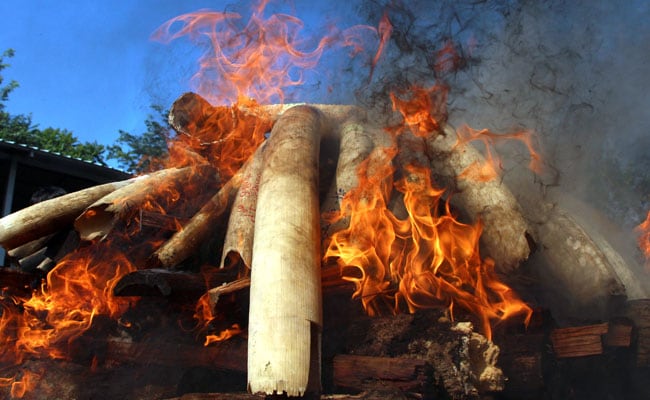 Confiscated pieces of ivory being burned by Myanmar officials in Naypyidaw. (Reuters)

Myanmar authorities destroyed hundreds of seized elephant tusks, pangolin scales and other animal parts, worth a total of $1.3 million on the black market, on Thursday as part of a crackdown on illegal wildlife trafficking.

Authorities set fire to pyres stacked with 277 pieces of elephant ivory, 1,544 antelope horns, 180 tiger bones and other confiscated items weighing more than 1.4 tonnes at a government compound in the capital, Naypyitaw.

"It is crucial to sustainably conserve our country's natural resources, including land, water, forest, mountains and wildlife, for the sake of our future generations," Minister of Natural Resources and Environmental Conservation Ohn Win said during the ceremony. Myanmar, which lies in the notorious "Golden Triangle" region bordering Thailand and Laos, is at the heart of the global trade in illicit wildlife, with goods smuggled mostly to China.

A report by conservation group Save the Elephants this week said China's recent ban on the ivory trade had done little to stop the "prolific growth" in trade in the Myanmar-China border town of Mong La, where there has been a 60 percent growth in new ivory items seen for sale in the past three years.