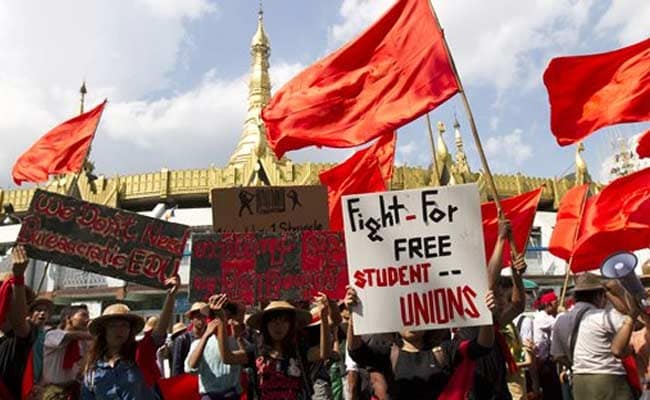 Myanmar today said political forces were manipulating education reform protests to "create unrest", amid increasing unease over rallies across the country, a claim rejected by activists.

The information ministry, in a nod to the former junta-ruled nation's often bloody history of student activism and military crackdowns, said previous bouts of violence had "tarnished the country's image in the past".

"Some political organisations, so-called students and those masterminding the rallies are using the students with the excuse of education to create unrest," it said in a Myanmar language statement published in the state-controlled Mirror newspaper.

Hundreds of students and supporters are marching towards the commercial hub Yangon from the central city of Mandalay to call for reforms to an education bill that they claim is undemocratic.

The students have pressed on with their rally, despite warnings from authorities and meeting several police blocks on their route.

Demonstrators rejected the suggestion that they were being manipulated for political means.

"The student leaders say that there is no one behind them but the people," one veteran activist marching with the protesters told AFP on condition of anonymity.

Protests, which began in November on the heels of US President Barack Obama's visit to the country, flared again in January after students said the government had failed to meet their deadline for talks in reforming the education system.

Student activism is a potent political force in Myanmar, with young campaigners at the forefront of several major uprisings, including a mass 1988 demonstration that ended in a bloody military assault on demonstrators.

The government has appeared wary of acting against the rallies for education reform, which have taken place without permission in a country where illegal protests are often met with arrests.

Aung San Suu Kyi's opposition party, the National League For Democracy (NLD), has offered support to the students, but sought to keep a distance from the negotiations with government.

NLD spokesman Nyan Win said the idea of political influence in the student protest movement was "not true at all".

"If anything is done (against the students), the government will be responsible," he told AFP.

The students say the new law curbs academic freedom and want it altered to include free and compulsory education until children reach their early teens, permission to form student and teacher unions, and teaching in ethnic minority languages.

Promoted
Listen to the latest songs, only on JioSaavn.com
Myanmar's president last month called on parliament to rethink the law after the resurgence of protests.

Talks between the government and student representatives have so far failed to bear fruit and negotiations have been postponed until later this month.