"My Little Son":Ukraine Woman Weeps By Grave On Route Of Russian Retreat

Since Russian President Vladimir Putin called off his northern offensive to capture the capital of Kyiv, Ukrainian authorities have had to take stock of what they left behind. 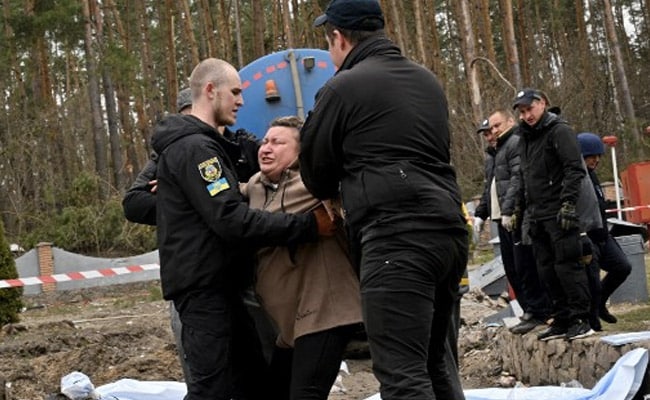 Once her son was laid out in the open, Lyudmyla ducked under the tape, rushing over to his body.

A Ukrainian mother fell to her knees, clawing the earth behind a razed petrol station.

She had just peered inside a manhole and found the corpse of her adult son, sharing the pit with another man.

"My little son," she wailed into the gaping chamber.

His body was warped by water, shrouded in sediment and eclipsed by an army sleeping mat.

But she recognised him by his distinctive footwear and, devastated by grief, refused to quit the crumbling lip of the shaft.

"Let me see him for a while," she begged to a woman who was trying to pull her away.

"I won't leave," she wept, hugging the ground where her son's remains had been dumped out of sight.

Nearby, at the roadside, sat the remains of two tanks, mangled by combat.

One was scorched to black and orange, the other was painted with a white "V", the insignia of Russian invading forces, who withdrew from this region last week.

Since Russian President Vladimir Putin called off his northern offensive to capture the capital of Kyiv, Ukrainian authorities have had to take stock of what they left behind.

The most shocking images so far emerged from the commuter town of Bucha, occupied for more than a month. It is here that Ukraine alleges Russian troops committed war crimes by shooting civilians in the street.

The Kremlin has denied any hand in the slayings, denouncing photos of the dead as fakery.

But other villages, towns and roads on the north-west flank of Kyiv have their own stories to tell.

On Sunday, AFP saw the remains of two men -- who seemed to be wearing civilian and military clothing -- inside a shaft behind a motorway service station 15 kilometres (9 miles) west of the capital, near the village of Buzova.

Village official Lyudmyla Zakabluk said both were members of Ukraine's Territorial Defence Forces (TDF), a reserve faction of Ukraine's armed forces. They had been missing since March 16.

The distraught mother was also named Lyudmyla, she said, and her son Yevhenii, was only 23 years old.

"My heart is just heavy," said 60 year-old Zakabluk. "This is a horror.

"How is it possible to do such things?"

The summary execution of prisoners of war is forbidden under the Geneva Conventions.

Although the cause of death of the two men was not immediately apparent, the head of one of the men was streaked with blood.

Once a tanker had siphoned water out from the bottom of the manhole, police ringed it off with crime-scene tape and one man plunged inside.

A slim, white rope was tied to each body in turn. It took 10 men to haul up the first one. Nine pull up Lyudmyla's son, the lighter of the two.

A bumblebee buzzed around the melted metal of one of the devastated tanks. Tiny birds flew in and out of the looted grocery shop of the petrol station forecourt.

But the sounds of the mother's grief cut over everything.

Once her son was laid out in the open, Lyudmyla ducked under the tape, rushing over to his body.

It took four men to hold her back.