My Husband Was Tired, He Stumbled. He Had A Disease We'd Never Heard Of

In 2010 Lynn Peterson Mobley's husband was diagnosed with peripheral neuropathy, or PN, a disease they had never heard of. 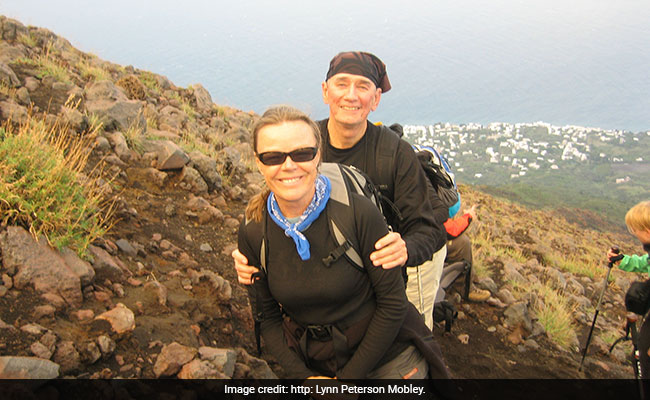 Lynn Mobley's husband is fighting to beat back the numbness that robs him of his balance.

We started our ascent of Italy's Stromboli volcano at dusk, as the Tyrrhenian Sea darkened behind us. It was a long, steady trek upward, but not an exhausting one. At the crater's rim, with fountains and bombs of glowing lava exploding into the night sky, we soon forgot the effort it had taken to get there.

Going down, however, was unforgettably harder. The trail through the deep black sand blanketing the massive cone was impossible to follow by the paltry light of our helmet lamps. I had never witnessed my athletic husband struggle before. He stumbled down the mountain for two hours with borrowed walking sticks, falling more than once.

We had been hiking along the Volcano Route: Vesuvius, Amalfi's Trail of the Gods, Vulcano, Etna. Robert was a fit 70-year-old then, never sick in his life. But after Stromboli, things weren't quite the same. Back in Rome for a few days before our flight home, he was aware of weakness in his feet and lower legs. His shoes slapped the sidewalks as if they were too big. It took forever to get back to our hotel after a day of sightseeing.

He was tired, yes, but this was different.

Later that year, in 2010, he was diagnosed with a disease that we had never heard of, and that he shared with millions of other Americans: peripheral neuropathy, or PN.

In Robert's case, numbness that had started in his feet was slowly working its way up his legs. He had begun using his muscles differently to compensate for information his nerves could no longer transmit. It had happened so quietly and slowly, he hadn't been aware of it until our Italian trip.

In a great many cases, PN is crippling, limiting mobility and increasing the likelihood of falls, which can be disastrous. The pain of PN in the extremities has been likened to a horrific case of shingles. For many, its debilitating pain prevents sleep and requires medication. My husband turned out to be in the minority of lucky ones who do not have any pain.

Most cruelly, with or without pain, the disease robs people of the things they loved doing - think tennis or dancing - and renders everyday activities such as walking the dog impossible. With the loss of balance, walking without support is risky, stepping over the cat can be deadly, and picking up the grandkids becomes just a memory.

Exercise can ameliorate some of the effects of nerve damage. The exercises that build up strength and promote balance can help preserve and improve the condition of the nerves, postponing their deterioration. But without adequate guidance, many patients can only feel their lives slipping away from them, with no relief in sight.

Estimates of the number of Americans with peripheral neuropathy vary, with the National Institutes of Health putting it at 20 million and the Foundation for Peripheral Neuropathy at 30 million. The foundation, which has established a research registry to compile data and biosamples on PN patients, sets the average age of those with the disease at 63, though onset often goes unnoticed.

For such a widespread malady, little research is being funded. In 2016, NIH granted $122 million for the study of PN, while more than $4 billion was awarded the same year for research on rare diseases. For whatever reason, perhaps because PN is just too ubiquitous, it fails to garner much attention. Although dangerous, it is not considered fatal. (While statistics are kept on deaths by falls, what causes the falls goes largely unreported.) And PN is a disease that generally attacks older people, who make terrible poster children.

Doctors cannot fix peripheral neuropathy, they don't know how to treat it, and in many cases they don't know what caused it. It is often up to the patient to find the way to live with the condition.

But patients might not understand that they have PN because their condition is often called by other names, such as nerve damage or nerve disease or diabetic nerve pain, making it harder for them research ways to cope with worsening symptoms.

I was a month shy of 64 in 2017 when I decided I should start running again. Suddenly it seemed important to do something symbolic to defy aging, so I turned my morning walk in the woods into a morning run.

Within a few weeks, my lower back began bothering me, and I returned to walking. But I noticed that my feet felt funny. My toes felt as if my socks were bunched up beneath them, while the balls of my feet had become hypersensitive; a stray grain of cat litter underfoot was maddening. At first I chalked it up to jogging, but after a few months of discomfort I checked in with my doctor, who sent me to a neurologist.

Various possibilities were ruled out, one by one. No tumors, and while my spine was not in great shape, it could not be blamed for the numbing in my feet. A number of diagnostic tests were performed. I held off on the definitive test for last, because I did not want to believe what was becoming increasingly probable.

Sure enough, that test, a biopsy of skin samples showing diminished numbers of nerves at various points along my legs, proved positive for small fiber peripheral neuropathy: The sensory nerves were withering away.

When my neurologist learned that my husband also had PN, he immediately advised me to have our well water tested. Metals, chemicals, organic compounds, dozens of substances including mercury, arsenic, pesticides, herbicides and lead were tested for, and none turned up in unacceptable levels in our drinking water.

Robert and I have peripheral neuropathy that is "idiopathic," which simply means that there is no known cause. Nor is there a cure. And the prognosis is a sure if unpredictable deterioration in balance, strength and mobility.

Theories on the causes of PN abound. Some people claim that the statins we took for several years are responsible. Another theory links PN to cooking with aluminum. Probably unnecessarily, I jettisoned the heavy-duty aluminum pots and pans I had used almost exclusively for 30 years. In my initial panic I was willing to do anything to slow the pace of my illness.

I also joined a health club to work on strengthening the muscles that would help me remain steady in the years to come. This came with an unexpected bonus, because I am finding the mood elevation of an aerobic workout to be really enjoyable, if not outright addictive. My diet was fairly healthy to begin with, but it is better now and I shop more in the organic aisles. Too little, too late, but it can't hurt.

Robert has remained active, fighting to beat back the creeping numbness that robs him of his balance. He pesters his doctors, unwilling to accept that there is nothing more to be done.

In May of last year, we hiked in Sicily again. At that time, Robert could still do five or six miles a day, sometimes using hiking poles to steady himself. (It is odd but true that he finds uneven trails much easier to walk on than flat concrete.)

This year, though, after a minor injury led to a few months of near-inactivity, he lost so much strength in his legs that a hiking vacation was out of the question. Shocked by this, he joined my health club, where he pushes himself harder than he did at home. He feels a few pangs as he walks by the basketball court, now permanently off-limits, but he enjoys the bike and the pool well enough. I am proud of him, and grateful. He will be 80 in August, and he is not about to give up.

Powerlessness is its own special hell. Fortunately, the Peripheral Neuropathy Support Group of the DC Metro Area has been a boon, with members who share information and experiences that make us feel less alone and more hopeful. The Foundation for Peripheral Neuropathy has a wealth of information on its website, and it hosted a terrific patient conference with a forum of researchers and doctors from Johns Hopkins, one place where PN research is being actively conducted. Trying to stay abreast of breakthroughs in treatment and ideas about the prevention of further deterioration is not as hard as we might have feared.

Our goal, which seems achievable, is to take at least one more of the trips we both loved, touring the countryside of Europe on foot or hiking the trails of the American West.

We shall see. Goals help. A cure would help a lot.

(Except for the headline, this story has not been edited by NDTV staff and is published from a syndicated feed.)
Comments
peripheral neuropathyHealthnervous disorder