Watch: Tractor-Trailer Crashes Into Cars Stuck In Traffic In US, Several Killed

Flames ignited by the crash on Interstate 70 engulfed three trucks and 12 cars, Ty Countryman, a spokesman for the police department said. 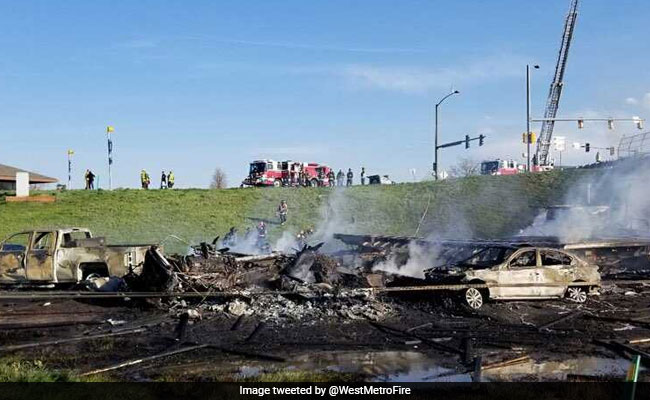 Multiple people were killed and many others injured in a fiery multi-vehicle crash west of Denver during the evening commute on Thursday when a tractor-trailer careened out of the control into several other vehicles, police said.

Flames ignited by the crash on Interstate 70 engulfed three trucks and 12 cars, Ty Countryman, a spokesman for the police department in Lakewood, Colorado, told reporters.

"The vehicle came down and ended up colliding with slower traffic, causing a very big chain-reaction crash that also ignited and started a fire," Countryman said, adding that six other people injured in the crash were taken to local hospitals.

Police did not say how many people died, but in a late night Twitter post, they said, "Our crash investigation on I-70 continues. We can now confirm multiple fatalities."

Video footage of the accident's aftermath showed flames raging beneath and around a highway overpass and a pall of black smoke in the air over the scene.

A stretch of Interstate 70, a major east-west highway route that runs through Denver into the mountains, was closed in both directions. Police said late Thursday that the highway would remain closed overnight.

Countryman said engineers from the state Transportation Department were inspecting the overpass bridge for possible structural damage from the fire.

Investigators are looking at whether the truck lost its cargo, experienced brake failure or had some other mechanical issue, he said. It was not immediately clear which vehicle accounted for the fatality, he said.

(Except for the headline, this story has not been edited by NDTV staff and is published from a syndicated feed.)
Comments
Fiery CrashDenver ColoradoColorado Fiery Crash