"I really didn't believe it was a mountain lion. I thought maybe a bobcat," said the woman who discovered the big cat. 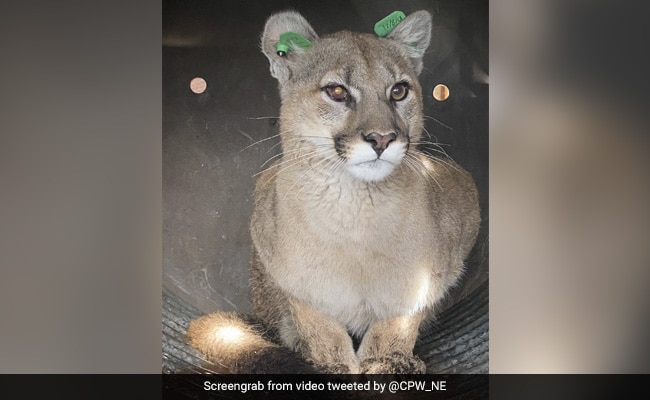 A couple found a mountain lion under their home deck.

Wildlife officials in Colorado, USA, relocated a mountain lion that was discovered relaxing under the deck of a family's house in a Denver suburb. The big cat was found under a resident's deck in Englewood Thursday evening, according to Colorado Parks and Wildlife.

Lily Rutledge-Ellison told KDVR her pet cat was the first to stumble upon the mountain lion at their home in Englewood. "We were walking with him and he went under the deck and came jumping out with a really bushy tail," Ms Rutledge-Ellison said.

In cats, a bushy tail often signals defensive aggression to other cats or agitation and fear - and in this case, the reason soon became apparent when Ms Rutledge-Ellison and her boyfriend checked under the deck. The couple looked underneath the deck to find the mountain lion staring back at them.

"I was like in Englewood? No way. That's why I really didn't believe it was a mountain lion. I thought maybe a bobcat," said Ms Rutledge-Ellison.

Colorado Parks and Wildlife - Northeast Region shared a photo of the mountain lion - a female believed to be two-years-old - after it was removed and relocated. "Wildlife officers were able to remove this mountain lion that was discovered by an Englewood resident lying underneath its deck Thursday evening," the department said on Twitter.

Wildlife officers were able to remove this mountain lion that was discovered by an Englewood resident lying underneath its deck Thursday evening.

Officials of Colorado Parks and Wildlife tranquilised the mountain lion to remove it from under the deck on Friday morning. It was a rescue operation that lasted five hours. "Everybody was very gentle. They were really trying to be as safe as possible for all the people around," said Ms Rutledge-Ellison.

The department also shared a video of the mountain lion being released in the wild.

The mountain lion was relocated out of town and into more appropriate habitat. Here is video of its release. pic.twitter.com/aIwlj9qDRV

On Twitter, many praised wildlife officials for rescuing the mountain lion humanely.

Area Wildlife Manager Matt Martinez thanked the Englewood Police Department and Code Enforcement for "assisting us in getting that lion out safely."