On Video, Hundreds Of Dolphins On Hunt Cut Through California Waters

Hundreds of common dolphins in a 'superpod' sliced through slate-gray waters off Monterey Bay, California, while on the ravenous hunt for bait fish. 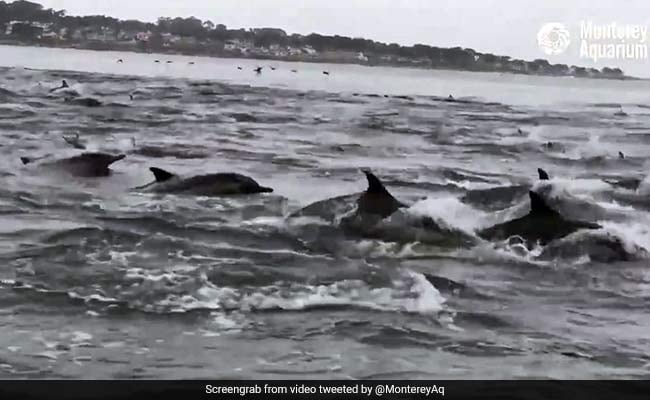 The dolphins were in several pods and numbered about a thousand, the Monterey Bay Aquarium said.

Dolphins have refined their precision killing over millions of years of evolution, roaming oceans in pods to funnel fish into their jaws.

That daily ritual usually occurs far from land. But this week, something far more rare happened.

Hundreds of common dolphins in a 'superpod' sliced through slate-gray waters off Monterey Bay, California, while on the ravenous hunt for bait fish.

"It's a very special sighting nearshore of one of the ocean's magical moments often hidden away from human observation, but to the dolphins it was probably just another Monday," said Patrick Webster, a member of Monterey Bay Aquarium's social media team, which captured the hunt on video.

The dolphins were in several pods and numbered about a thousand, Webster told The Washington Post on Saturday.

Aquarium staffers saw a big group this time last year from their back deck. But land lovers were close enough this week to catch a glimpse, he said.

Pods commonly hunt in family or related groups, and they typically grow to about a few dozen, or maybe even a hundred, Webster said.

"Groups like this thousands strong gather together when the food run brings them together, like a concert or Burning Man or the Super Bowl."