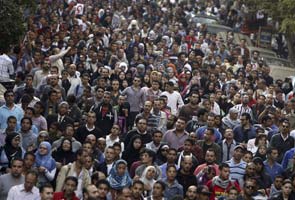 Egyptians march from Tahrir Square to Mohamed Mahmoud Street in Cairo, the venue of clashes, as they attend the funeral of youth activist Gaber Salah, also known as Gika, at the Omar Makram mosque in Cairo .

Opponents of President Mohamed Mursi rallied in Cairo's Tahrir Square for a fifth day on Tuesday, stepping up calls to scrap a decree they say threatens Egypt with a new era of autocracy.

The protest called by leftist, liberal and socialist groups marks an escalation of the worst crisis since the Muslim Brotherhood politician was elected in June and exposes the deep divide between newly empowered Islamists and their opponents.

The crowd is expected to grow in the late afternoon but hundreds were already in the square after many camped overnight. Police fired tear gas and organisers urged demonstrators not to clash with Interior Ministry security forces.

One person - a Muslim Brotherhood activist - has been killed and hundreds more injured in violence set off by a move that has also triggered a rebellion by judges and battered confidence in an economy struggling to recover from two years of turmoil.

Mursi's opponents have accused him of behaving like a modern-day pharaoh. The United States, a big benefactor to Egypt's military, has voiced its concerns, worried by more turbulence in a country that has a peace treaty with Israel.

The protest will test the extent to which Egypt's non-Islamist opposition can rally support. The Islamists have consistently beaten more secular parties at the ballot box in elections held since Hosni Mubarak was toppled in February, 2011.

"We don't want a dictatorship again. The Mubarak regime was a dictatorship. We had a revolution to have justice and freedom," said Ahmed Husseini, 32, who was speaking early on Tuesday in Tahrir Square - scene of the historic uprising against Mubarak.

Activists have been camped out in Tahrir Square since Friday, blocking it to traffic and clashing intermittently with riot police in nearby streets.

The decree issued by Mursi on Thursday expanded his powers and protected his decisions from judicial review until the election of a new parliament expected in the first half of 2013. The New York-based Human Rights Watch has said it gives Mursi more power than the military junta from which he assumed power.

In a bid to ease tensions with judges outraged at the step, Mursi has assured the country's highest judicial authority that elements of the decree giving his decisions immunity would apply only to matters of "sovereign" importance. Though that should limit it to issues such as a declaration of war, experts said there was room for a broader interpretation.

In another step to avoid more confrontation, the Muslim Brotherhood cancelled a mass protest it had called in Cairo for Tuesday in support of a decree that has also won the backing of more hardline Islamist groups.

But there has been no retreat on other elements of the decree, including a stipulation that the Islamist-dominated body writing a new constitution be protected from legal challenge.

Its popular legitimacy undermined by the withdrawal of most of its non-Islamist members, the assembly faces a raft of court cases from plaintiffs who claim it was formed illegally.

The new system of government to be laid out in the constitution is one of the issues at the heart of the crisis.

"The president of the republic must put his delusions to one side and undertake the only step capable of defusing the crisis: cancelling the despotic declaration," liberal commentator and activist Amr Hamzawy wrote in his column in al-Watan newspaper.

"We asked for the cancellation of the decree and that did not happen," said Mona Amer, spokeswoman for the opposition movement Popular Current, part of a coalition of parties that are joining forces to challenge the Mursi decree.

Mursi issued the decree a day after his administration won international praise for brokering an end to eight days of violence between Israel and Hamas in Gaza.

The decree was seen as targeting in part a legal establishment still largely unreformed from Mubarak's era, when the Brotherhood was outlawed.

Rulings from an array of courts this year have dealt a series of blows to the Brotherhood, leading to the dissolution of the first constitutional assembly and the parliament elected a year ago. The Brotherhood had a major say in both.

The judiciary blocked an attempt by Mursi to reconvene the Brotherhood-led parliament after his election victory. It also stood in the way of his attempt to sack the prosecutor general, a Mubarak hold over, in October.

In his decree, Mursi gave himself the power to sack that prosecutor and appoint a new one. In open defiance of Mursi, some judges are refusing to acknowledge that step.

But in a sign that other judges were willing to meet Mursi half way, the Supreme Judicial Council, the nation's highest judicial body, proposed Mursi limit the scope of decisions that would be immune from judicial review to "sovereign matters", language the presidential spokesman said Mursi backed.

"The president said he had the utmost respect for the judicial authority and its members," spokesman Yasser Ali told reporters in announcing the agreement on Monday.

Mursi's administration has defended his decree as an effort to speed up reforms and complete a democratic transformation. Leftists, liberals, socialists and others say it has exposed the autocratic impulses of a man once jailed by Mubarak.

Before the president's announcement, leftist politician Hamdeen Sabahy said protests would continue until the decree was scrapped and said Tahrir would be a model of an "Egypt that will not accept a new dictator because it brought down the old one".

Promoted
Listen to the latest songs, only on JioSaavn.com
Mursi has repeatedly stated the decree will only stay in place until a new parliament is elected - something that can only happen once the constitution is written and passed in a popular referendum.

Though both Islamists and their opponents broadly agree that the judiciary needs reform, his rivals oppose Mursi's methods.
© Thomson Reuters 2012
Comments
Mohamed Mursi