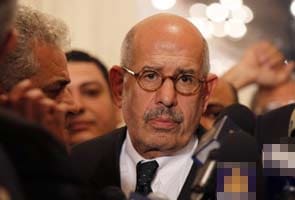 Cairo: Liberal opposition leader Mohamed ElBaradei has been chosen as Egypt's new prime minister, the Tamarod campaign behind the protests that toppled Islamist President Mohamed Morsi said on Saturday after talks with the country's interim president.

A military source confirmed to AFP that the former UN nuclear watchdog chief was to be sworn in as premier later on Saturday, three days after the army overthrew Morsi.

Tamarod had nominated ElBaradei to represent the movement in transition negotiations with the military.

Promoted
Listen to the latest songs, only on JioSaavn.com
ElBaradei, who won the Nobel peace prize in 2005 for his work with International Atomic Energy Agency, returned to Egypt in 2010 and became a prominent opponent of veteran strongman Hosni Mubarak in the lead-up to the 2011 uprising that overthrew him.